While the First World War officially ended at the signing of the Treaty of Versailles on June 28, 1919,  major hostilities  concluded on November 11, 1918,  at the eleventh hour of the eleventh day of the eleventh month.  November 11 was thereafter observed as Armistice Day  in many of the allied nations, including France, the United States, Belgium, Great Britain, Canada, Australia and other Commonwealth nations.   The day originally served to remember the  9 million combatants who had died  during the war.  After the Second World War, veterans of that conflict pressed in the United States to have November 11 become a day on which all veterans of military service would be honored, irrespective of  when they served in the U.S. Armed Forces.   President Dwight D. Eisenhower, himself a veteran of both the first and second World Wars,  signed the enabling legislation into effect in 1954.

Today, although all combatants from “war to end all wars”  have died,  we grapple still with the legacy of that terrible conflict which spawned several national revolutions,  reshaped the map of Europe, led  to the Second World War, and  directly or indirectly occasioned the creation of the modern states of Iraq, Saudi Arabia, Jordan and ultimately Israel.

The First World War is regarded  as a watershed event in the history of warfare, society and culture.  Government powers (taxation, rationing, conscription) significantly expanded in many nations in order to mobilize entire economies to fight a technologically advanced and industrially intensive war of such great geographic extent and duration.   Propaganda reached new heights of pervasiveness and persuasive power as governments increasingly saw the necessity to garner and maintain broad public support  in favor of war policies in the context of  broad literacy rates and mass suffrage.

One of the most prominent manifestations of the new propaganda was the war poster, many of which have survived in the collections of libraries and historical societies, as well as in private collections.   The Special Collections Research Center of the Temple University Libraries hold  a magnificent collection of over 1,500 World War I posters which were donated to Temple in 1937 by George F. Tyler who had been a Major in the U.S. Army Field Artillery during the War.  Temple’s Tyler School of Art is named for Tyler’s wife Stella Elkins Tyler.    Virtually all these posters have been digitized and are now freely available for study in our Digital Collections.      An interpretive online exhibition is also offered at:  http://exhibitions.library.temple.edu/exhibits/ww1/ .

As students traverse the main floor of Paley Library, rushing to and from classes this spring semester, a few stop every now and then to experience the poetry. Spread among the display cases on the first floor of Paley are books and documents from the Temple University Libraries Special Collections Research Center (SCRC) that invite us to explore 20th century alternative and small-press American poetry. As the crush of exams and final projects arrives, exploring this poetry display can be a great way to clear one’s mind and do a bit of de-stressing.

According to Margery Sly, Director of the SCRC,all the material in the exhibit comes from SCRC manuscript and rare book holdings. She adds that the display was designed as a journey into our poetry collections that begins with Philadelphia-region forefathers Walt Whitman and Edgar Allen Poe, who were considered radical in their day and moves forward into the work of 20th century poets. The display was also intended to coordinate with a lecture about Whitman, and to also promote the use of the poetry collection for research by Temple students.

Moving among the cases provides insight into poets who be less familiar to us but whose work is significant in the world of poetry. The work of accomplished poets such as John Burnett Payne, Lyn Lifshin, Dorothea Grossman and Tony Quagliano are featured in this display. Browsing the poems, letters and related documents one senses the importance the small press has played in expanding the dissemination of poetry in 20th century America. A small (literally) book of verse, such as Grossman’s “The First Time I Ate Sushi” communicates “the fun of speaking English” (a line from her poem Future Past). 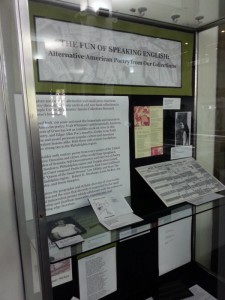 If you want to explore those other iconoclasts and innovators of American poetry, scattered among the display cases are rare artifacts for Poe and Whitman found in our Special Collections Research Center. Then proceed up the stairway to the mezzanine level where you will find several cases dedicated to Poe and Whitman. There you will find some unique items documenting the lives and works of these great writers. This exhibit will remain in Paley Library through August. Be sure to take some time to explore before it returns to the SCRC.

Obtaining a great collection of papers from a scholar or organization or other types of unique materials can be a significant accomplishment for the special collections department of an academic research library. Increasingly, what makes an academic library unique or distinctive is the content of its special collections and archives. According to the New York Times article “In University Holdings, Entry to History and Culture“, these collections can also serve to enhance the reputation of the institution as a resource for global scholars. The article states:

U.T.-Arlington officials, meanwhile, hope their future William Blair Collection will bolster their library’s reputation as a repository for artifacts of black history. For universities striving to improve their reputation — particularly the handful, including U.T.-Arlington, vying to be the state’s next Tier 1 research institution — special collections can provide a boost. And for a general public largely unaware of the items stored in public universities, they can be a veritable treasure-trove.“Tier 1 is all about scholarship and recognition by your peers from around the world for the great and wonderful research that you do,” said Ronald L. Elsenbaumer, the provost at U.T.-Arlington. “And special collections bring that uniqueness to your university. Having those unique, scholarly activities going on that distinguish you, that’s important.”