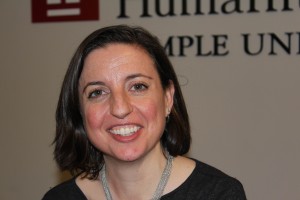 On March 7, 2013, the Center for the Humanities At Temple (CHAT) hosted Kathleen Fitzpatrick, Director of Scholarly Communication at the Modern Language Association. Dr. Fitzpatrick’s talk, The Humanities In & For the Digital Age, focused on how scholars can leverage digital technologies to solve deep contradictions that currently plague academic publishing.

Fitzpatrick argued for the peer-to-peer structure of online communication as a corrective to problems with traditional peer review processes. Online publishing platforms allow scholars to publish their work earlier, calling on a supportive network of known peers to provide feedback during an idea’s development. This approach also lets academic authors remain engaged with their work longer, as their focus shifts from completing scholarly productions to the process involved in knowledge creation.

Fitzpatrick expects that an additional benefit of this new mode of authorship will be greater scholarly engagement with the broader culture, bringing with it greater awareness of the humanities’ potential for enriching public life.  For such changes to bear fruit, the conservative culture of academia will need to recognize online publication and review as valuable activities meriting tenure consideration.

Rather than claiming that technology itself is a panacea to the scholarly communication crisis, Fitzpatrick’s work highlights the quintessentially social nature of the best technological solutions. She has incorporated these ideas into her own scholarly practices, releasing an online draft of her most recent book Planned Obsolescence: Publishing, Technology, and the Future of the Academy for open review. At the Modern Language Association, she has helped in the development of MLA Commons, an online space where association members can form fluid groups to share and review work-in-progress.

This week Bepress, a company that creates institutional repository software, announced it had created a new multi-disciplinary repository of open access research content. According the announcement:

Bepress Digital Commons invites you to explore a new database of open access scholarship (600,000+ articles) that is curated by university librarians and their supporting institutions, and represents thousands of disciplines and subject areas — from Architecture to Zoology. Researchers will never run into paywalls or empty records, because only full-text, open access research and scholarship are included. This new resource for researchers includes scholarship from hundreds of universities and colleges, including peer-reviewed journal articles, book chapters, dissertations, working papers, conference proceedings, and other original scholarly work. It continues to grow rapidly thanks to the contributions of researchers, librarians, faculty, and students who believe that scholarship is a community enterprise.

It will be interesting to see how quickly the Digital Commons Network grows and whether it will catch on as a valued research resource among scholars, but we welcome this new entry into the world of open access scholarship.