New Content for Opera in Video! Alexander Street Press added 30 hours of performances and documentaries to Opera in Video. The new content includes:

You can see a complete list of the new material here: http://opiv.alexanderstreet.com/WhatsNew

Opera in Video is now complete with 500 hours of streaming video. 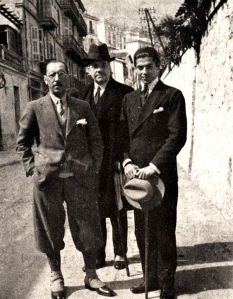 Michael Jackson, known as “King of Pop”, died unexpectedly Thursday, June 25th in Los Angeles at age 50. His career began when he was 11 as part of the group the “Jackson Five”, the youngest of five brothers. He is known for his extraordinary talent in music and dance, and as a gifted entertainer. He was an innovator, most notably in the music video medium and early MTV. Jackson’s career was marred by controversy caused by allegations of personal sexual misconduct. In addition to being a musician, dancer, and entertainer, Michael Jackson was known for his philanthropy, particularly his work to help South Africa, and his composing and organizing the production of the song “We Are the World”, with proceeds going to African aid. Michael Jackson will always be known as a trailblazer in the field of pop music, and his recordings continue to break sales records.
**********
Following are selected resources for more information about Michael Jackson. In addition to sources readily available through news media, also included are books in the library, encyclopedia articles, and scholarly articles, resources that most people may not have thought about in regards to a popular music figure. These resources give scholarly, insightful, and analytical perspectives of Michael Jackson such as the meanings of his dance movements, the sociological aspects of his music videos, the religious significance in “Earth Song”, and more. Articles in languages other than English are a testimony to Jackson’s worldwide fame and appeal. Here you will also find primary resources such as books by Michael Jackson, and interviews that he gave when he was in his teens. These in-depth perspectives you would not find anywhere else, but @ your library! Enjoy.
News Sources

*****Many are restricted to Temple University users only.  Enter your AccessNet username and password.*****

Dyson, Michael Eric. A postmodern Afro-American secular spirituality: Michael Jackson. The theology of American popular music: Proceedings of the first conference in theomusicology, 7-8 April 1989
Abstract: The achievements of Michael Jackson are viewed as representing a postmodern form of black American secular spirituality that is primarily televisual and performance-oriented in its medium of expression, and that wrestles in poignant fashion with moral themes that reflect black cultural and religious consciousness.

Dyson, Michael Eric. Wanna Be Startin’ Something? Two Sharp Minds Contemplate the Significance of the Michael Jackson Trial. VIBE 13:10 (October 2005) p.128-131.
Early, Gerald. Three notes on the roots of rhythm. Conjunctions. Vol. 16, pp.197-208. 1991
Abstract: The success of Chubby Checker’s The twist with white audiences and the role of music in Shirley Temple’s and Michael Jackson’s films help to explain the cultural context of American rhythm and blues.

Harvey, Lisa St. Clari.Temporary insanity: Fun, games, and transformational ritual in American music video. Journal of popular culture. Vol. 24, no. 1, pp.39-64. (summer 1990)Abstract: Music video relies heavily on viewer reactions and perceptions. Video may be related to the masked ball, in which excess and indulgence in the usually forbidden are expected. Music video allows viewer participation at a vicarious level. The dream world of video may represent a collage of aspects of society. Videos of Michael Jackson, Lionel Richie, Tina Turner, Cyndi Lauper, and Duran Duran are summarized.

Ihlemann, Lisbeth. Michael Jackson: Monster, maskine, myte, menneske? Musik & forskning. Vol. 23, pp.110-25. Abstract: The pop star Michael Jackson draws attention not only to his music, but also to himself as a star and a person. Jackson’s image is explored in relation to star theories developed by media studies scholars. In contrast to most stars, Jackson’s persona seems to exhibit only the extraordinar
y: He is most often perceived as a freak or an alien. Jackson’s save-the-world attitude and obvious attraction to aggressive masculinity are explored.

Lau, Thomas. Idole, Ikonen und andere Menschen: Madonna, Michael Jackson und die Fans. “Alles so schön bunt hier”: Die Geschichte der Popkultur von den Fünfzigern bis heute. Stuttgart, Germany: Reclam, 1999. 241-253 pp. Abstract: In pop culture, the idol relies on the fan as much as the fan relies on the idol. Still, the relationship between the two has changed considerably in the past 20 years, also in light of the advent of techno culture.

Mayfield, Geoff. Over the Counter: Jackson Set Still Thrilling after All These Years. Billboard – The International Newsweekly of Music, Video and Home Entertainment 120:9 (1 March 2008) p.37.

Olligs, Ursula. Die rhythmisch-energetische Struktur von Michael Jacksons Tanz. Musik-, Tanz- und Kunsttherapie. Vol. 9, no. 2, pp.72-86. 1998.
Abstract: As no other pop idol, Michael Jackson bases his success on dance. By means of three video-tapes, the dance-psychological research of his dancing and body language tracks sources and characteristics of this way of movement. Reference to the dance therapeutically aspects are made.

Sonnega, William. Morphing borders: The remanence of MTV. TDR: The drama review. Vol. 39, no. 1, pp.45-61. spring 1995.
Abstract:World beat, a musical genre combining melodic and rhythmic features from various world cultures into a single form, has become commonplace in contemporary popular music, and has worked to break down cultural barriers. Implicit in its multilayered culturalism is the Futurist notion of a technologically generated utopia. In the past decade Music Television (MTV) has successfully capitalized on incorporating world beat into its programming, becoming a model that other artistic agencies have followed, as exemplified in the Michael Jackson music video Black and white and a recent theatrical production of Thornton Wilder’s play The skin of our teeth.

Stewart, Elizabeth and Theresa Buckland. Dance; music video. Parallel lines: Media representations of dance. London, England: Arts Council of Great Britain, 1993. 51-79 pp.
Abstract: The role of dance in music video extends across a spectrum. At one end of the spectrum is the dramatic mode, where dance operates prominently s an expressive tool; at the other end is the fragmentary dance mage, nondiegetic, unconnected to the musical producers, and perhaps nly flitting briefly across the scene. Here the moving body interacts ith video technology to form abstract visual and rhythmic patterning. his style is rarely used to present the dancing pop star, since ilmic treatment of the star is constrained primarily by the onstructive techniques of stardom. Videos featuring Kate Bush, Paula bdul, Michael Jackson, and Janet Jackson are analyzed.

Tischer, Rolf. “Heal the World”: Religion in der kommerziellen Rock- und Popmusik am  Beispiel von Michael Jackson.Gotteslob im Klang der Zeit: Rolf Schweizer zum 65. Geburtstag München: Strube, 2001. 122-142 pp. Abstract: The process of secularization would seem to be unstoppable in modern society, and yet there is a constant need for religiousness. This is reflected in contemporary pop and rock music. This is exemplified by a song and video clip by Michael Jackson: In Heal the world, he appears as a messiah. Such phenomena within supposedly superficial pop culture should be taken seriously.