Did you know April 11 is celebrated as Submarine Day?   In 2020, we salute the day as the 120th anniversary of the United States’  purchase of  its first commissioned submarine in 1900, the USS Holland. The Philadelphia Evening Bulletin snapped this image at the Philadelphia Naval Shipyard’s memorial service highlighting the day in 1960. 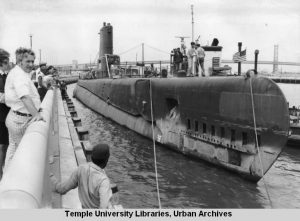 The Philadelphia Evening Bulletin captured this image as the Becuna was moved into Penn’s Landing Marina as a new tourist attraction on June 22, 1976.

The SCRC holds many other images of this historic submarine