In honor of Sexual Assault Awareness Month, Temple University Libraries’ Special Collections Research Center (SCRC) takes a closer look at one of the first rape crisis centers that was incorporated in 1973 in the United States, WOAR-Philadelphia Center Against Sexual Violence, formerly known as Women Organized Against Rape (WOAR), and the ongoing work to preserve their historical records.

Since the mid-1970s, WOAR has participated in a national network of local rape crisis centers and maintained membership in national and state organizations that guide the movement to end sexual assault. In 1989, along with the Pennsylvania Coalition Against Rape (PCAR), it was host to the eleventh annual National Coalition Against Sexual Assault (NCASA) Conference. With its theme, Diversity, Strength and Freedom: A New Declaration of Independence, the conference included several days of workshops, panel presentations, and events related to rape and sexual assault and sought to lift up the voices and experiences of women of color in particular. The conference opened on July 18 with the Women of Color Institute-–a full day program for, by, and about women of color, with Angela Davis delivering the keynote address. The next day, 150 women gathered in front of Independence Hall to sign a New Declaration of Independence. This document addressed the people and freedoms neglected by the original Declaration, citing racism and sexism to be the real lasting sources of tyranny and oppression in American society. It called for collective action to combat those forces.

The conference was well attended and received media attention, including a controversial article published in the Philadelphia Daily News on July 19, accusing conference planners of “drawing a color line” for the exclusion of white women from the Women of Color Institute. What the Daily News article failed to report was that the 1989 conference concluded at least a decade of increasingly active efforts of NCASA and WOAR to be anti-racist organizations and to provide safe spaces for women of color to speak and be heard.

The Women of Color Institute, a 1983 directive of the NCASA, was one of several initiatives to increase participation of Black, Latinx/a/o, and other under-represented groups in the anti-sexual assault movement. WOAR embraced these ideas noting a need to recruit more volunteers from communities of color throughout the 1980s. At that time in Philadelphia, close to 75% of people served by WOAR were Black women and children, while WOAR’s volunteer crisis responders remained predominantly white.

The events of the 1989 NCASA conference and WOAR’s activities to diversify the crisis response community are documented in the WOAR Records as well other collections held in the SCRC. WOAR’s records were recently reorganized and the collection finding aid expanded. As part of this effort, previously inaccessible digital records from WOAR’s archives including records about the state-wide initiative Women of Color Network were migrated from over 150 5.25-inch floppy disks and will be available for research soon. This is the first time SCRC staff has preserved digital content from that many computer disks from a single organization. 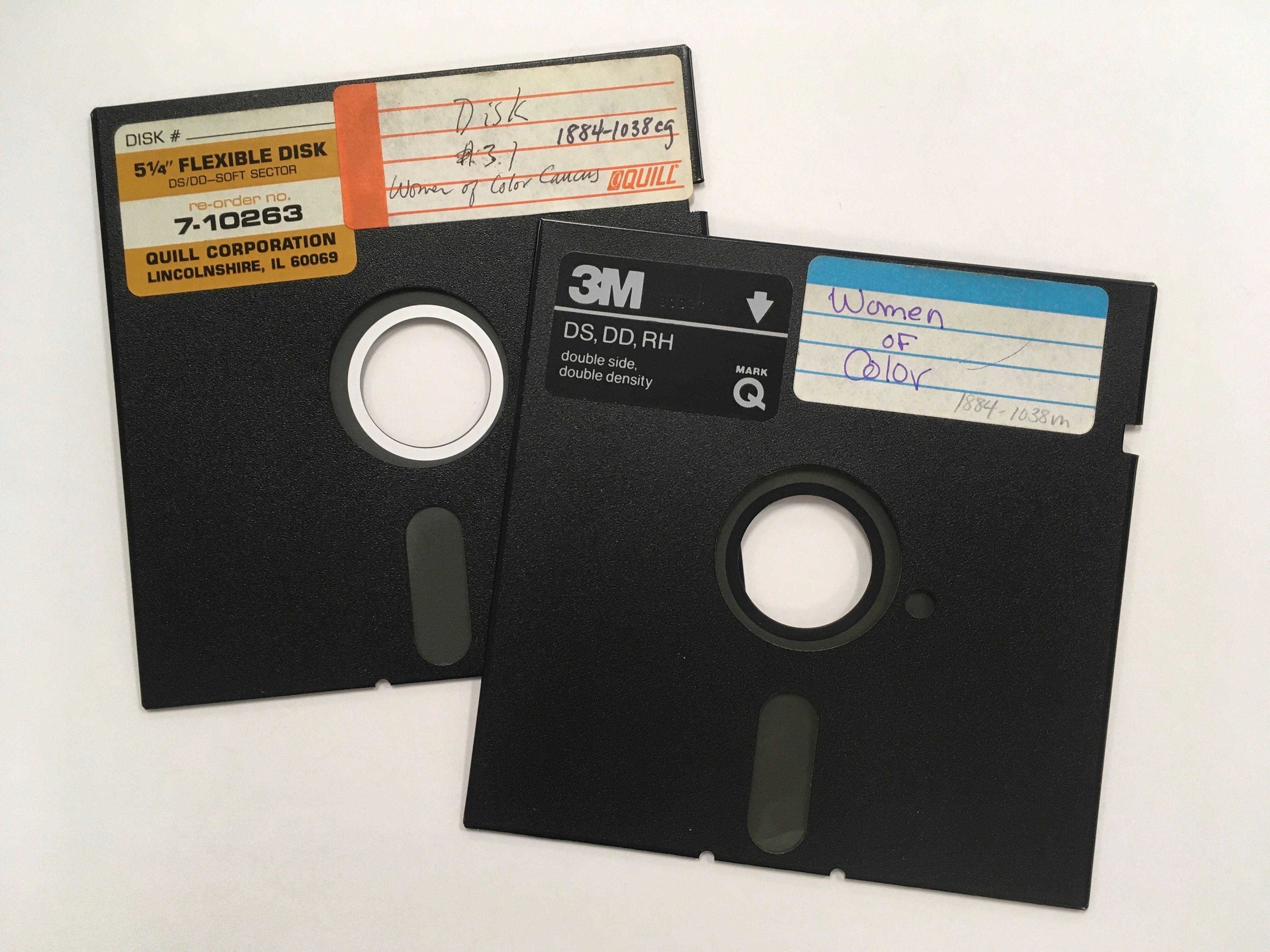 Flexible magnetic disks like the 5.25-inch floppy played a key role in workplace technology, record keeping practices, and personal computing from the 1970s through the 1990s. Digital records saved on 5.25-inch floppies are virtually trapped due to the lack of available hardware and the high susceptibility to damage caused by magnetic and electrical fields, dust and other contaminants, and temperature and humidity fluctuations.

So how easy is it to rescue digital information from these technological dinosaurs? It’s becoming increasingly more difficult, but archivists, digital preservationists, and retrocomputing enthusiasts have adopted tools like the FC5025 by Device Side Data to do this work. What’s a FC5025, you ask? It’s a 5.25-inch floppy controller that plugs into a computer’s USB port, attaches to a 5.25-inch floppy drive, and is compatible with IBM PC formatted disks, as well as Apple, Atari, Commodore, and TI, among others. Together, the floppy controller and disk drive facilitate read-only access to the files on the disk, meaning new files can’t be written to it, but existing files can be copied to newer media for long-term preservation without altering them. This is an integral and important step to safeguarding historical materials that record the actions and legacy of organizations like WOAR.