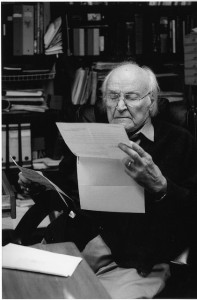 The Special Collections Research Center (SCRC) at Temple University Libraries is pleased to announce that the Franklin H. Littell collection is open and available for research.

View the finding aid on the Libraries’ website, along with portions of the papers which have been digitized.  Dr. Littell’s extensive library is cataloged and is available for use along with the papers in the SCRC reading room on the Ground Floor of Paley Library.

Franklin Littell (1917-2009), emeritus professor of religion at Temple University, led a distinguished career that spanned more than seventy years. He was a pacifist and activist, proponent of the Christian Laity and an advocate for new religious movements, an historian, political commentator and supporter of the State of Israel. He devoted ten years to work with the Protestant Churches and Laity in US-occupied Germany and more than fifty years to the study and remembrance of the Holocaust and German Church Struggle. He career is marked by strong beliefs in interfaith understanding and religious liberty.

The Littell and Sachs families donated Dr. Littell’s papers and library to Temple in 2010, where they were the focus of a three-year cataloging and processing project. Processing of the collection was funded through a grant from the Conference on Jewish Material Claims Against Germany, Inc., and generous support from Norman Braman.

The dynamic Morris and Robert B. Wolf were a father and son known for their dedication to the law and human services. In 1903, Morris Wolf co-founded Wolf, Block, Schorr and Solis-Cohen, a law firm well-known for hiring Jewish lawyers in spite of city-wide discrimination. Robert, a partner in his father’s firm, was likewise committed to creating positive change in Philadelphia, particularly in the field of juvenile justice.

Their papers are now open and available for research in the Special Collections Research Center.    Although this collection includes Morris’ personal papers, much of it is a testament to Robert’s juvenile justice advocacy efforts. From the 1970s to the 1990, he served as Director and Vice President of the Citizens Crime Commission of Philadelphia and as chairman of Philadelphia’s Youth Services Coordinating Commission, and was appointed to the Juvenile Advisory Committee of the Pennsylvania Commission on Crime and Delinquency. Robert helped draft criminal justice legislation and served on a number of Pennsylvania state juvenile justice committees and task forces. Most notably, perhaps, Wolf was appointed as a master by the United States District Court to oversee the city’s Youth Study Center following allegations of abuse and overcrowding.

In addition to juvenile justice, Robert Wolf’s interests also included local government reform and mid-century urban housing issues. In the early 1950s, he was a draftsman on the Philadelphia Home Rule Charter, and served as the chairman of the city’s Coordinated Housing Improvement Program (CHIP). He also taught urban studies courses at Haverford College and Temple University.

The finding aid for the Robert B. Wolf and Morris Wolf Papers can be found at http://library.temple.edu/scrc/robert-b-wolf-and-morris-wolf  .