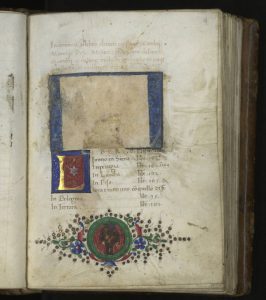 The Special Collections Research Center is very pleased to announce the opening of Making the Renaissance Manuscript: Discoveries from Philadelphia Libraries, an exhibition at the University of Pennsylvania.  It features a manuscript from Temple’s Harry  C. Cochran History of Business Collection, built by a Temple business school faculty member.  Temple is one of nine regional lenders to this exhibition of eighty-eight items.

Our item is included in the “Politics, Economics, and the Merchant Class” section of the exhibition–and in the stunning exhibition catalog which accompanies it.   In addition, Curator Nick Herman’s blog provides additional context and information.   A codex in Italian, created by Giorgio de Lorenzo Chiarini (circa 1400-     ), “Tracta di mercantie et usanze di paesi (Book of Trade and Customs of Countries),” Florence, Italy, 1481, the manuscript is  a “commercial manual for the Renaissance merchant.” It features the “types of goods available in a large number of cities, as well as the units of measure and coinage used, their denominations, and their exchanges rates with principal domestic currencies.” 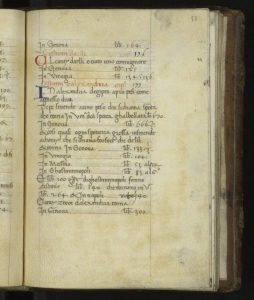 The exhibit, and its sister exhibit, Reflections on Medieval Life, soon to open at the Free Library of Philadelphia, are a celebration of the Philadelphia Area Consortium of Special Collections Libraries’  Council on Library and Information Resources  Bibliotheca Philadelphiensis project, It supported digitization and enhanced cataloging of medieval and renaissance manuscripts throughout the region–including 43 from Temple.  The Free Lbrary exhibition will feature two additional items from Temple’s Cochran collection–more on that soon.

As part of the Philadelphia Area Consortium of Special Collections Libraries (PACSCL) project Bibliotheca Philadelphiensis, the Special Collections Research Center has been cataloging and digitizing its medieval and early modern collections, which include financial ledgers, notated music, a Book of Hours, and philosophical texts.

While illuminated manuscripts are what immediately comes to mind when most people think of medieval manuscripts, Temple’s collections are a little different. We do hold the beautiful Book of Hours: Use of Toul from the 15th century, but the bulk of our medieval and early modern manuscripts are financial or legal documents.

While less artistically inclined, these manuscripts provide a glimpse into the everyday life of the period: how people held and transferred property, how businesses conducted their work, how banks managed their customers’ money, and how governments taxed their citizens.

In that last category, the Spanish Treasury in Peru Account Book is a ledger maintained by the Royal Treasury of Peru in 1571, then under Spanish control. The volume records not only general revenue and expenses, but also the tributes forcibly levied against the native people whose land was colonized by Spain. Another 16th century volume, an Italian Banking Ledger covering 1593-1595, is notable primarily for its extravagant binding and large size: over 19 inches tall. It contains debits and credits for a banking firm based in Rome.

An earlier manuscript, the  Florentine Grain Dealer Account Book, which covers the years 1466-1524, contains entries showing payments made for grain, rent, taxes, alms, and other income for this Italian business. The Marcoux Family Estate Account Book, which begins around the same time but continues into the 18th century, documents income for the estate, which was located in Dauphiné, France. The volume contains pages written right side up and upside down, as well as multiple paging conventions—perhaps to be expected in a ledger used for around three hundred years.

These are just four of the finance-related manuscripts recently digitized for the project. All four belong to SCRC’s Harry C. Cochran History of Business Collection, which was established by Temple University Head Librarian Walter Hausdorfer in 1950. The Cochran Collection includes a wide range of manuscripts and a smaller number of books documenting the evolution of commerce in Europe and the Americas between the 4th and 20th centuries.

The Bibliotheca Philadelphiensis project is funded by the Council on Library and Information Resources (CLIR), and aims to digitize and make available online medieval manuscripts from fifteen institutions in the Philadelphia area. Images and descriptive metadata will be released into the public domain and easily downloadable at high resolution via University of Pennsylvania Libraries’ OPenn manuscript portal. Temple is contributing nearly forty manuscripts to the project. SCRC’s digitized manuscripts are also being added to Temple’s Digital Collections website.

The Special Collections Research Center holds several leaves of medieval music, all of which have recently been digitized as part of the Philadelphia Area Consortium of Special Collections Libraries‘ (PACSCL) project Bibliotheca Philadelphiensis. The project is funded by the Council on Library and Information Resources (CLIR), and aims to digitize and make available online medieval manuscripts from fifteen institutions in the Philadelphia region.

All of SCRC’s medieval music manuscripts are leaves, meaning single pages. Originally, these leaves would each have been one page in a larger bound volume. Practice in previous times was often to cut apart such volumes in order to sell the individual pages at higher prices–which meant that the context of the original item was lost. The practice did, however, allow libraries which might not have been able to afford an entire medieval manuscript volume to acquire an example in the form of a single page.

The fate of the remainder of the volumes from which the SCRC leaves came is unknown. One benefit to digitizing dis-bound leaves is the possibility of one day finding their former companions and digitally reuniting the dismembered book, such as the project to reconstruct the Beauvais Missal.

One leaf typical of SCRC’s holdings is from a 16th century Spanish antiphonary or choir book displaying a page of music with Latin text for the Feast of the Immaculate Conception. This leaf would have been bound in a huge volume—over 30 inches tall—originally used by the choir of Jaén Cathedral in southern Spain. Antiphonaries were volumes containing the sung portions of the Divine Office and were intended to be placed in front of the choir for reference, hence their large size.

SCRC holds several antiphonary leaves, all presumed to be from Spain.

A French missal leaf from 1285 is an outlier in size at only a little over 7.5 inches tall. A missal is a liturgical book containing the texts necessary for the celebration of the Mass.

All images and descriptive metadata for manuscripts in the Bibliotheca Philadelphiensis project will be released into the public domain, easily downloadable at high resolution via University of Pennsylvania Libraries’ OPenn manuscript portal. Temple is contributing nearly forty manuscripts to the project. SCRC’s digitized manuscripts are also being added to Temple’s Digital Collections website.