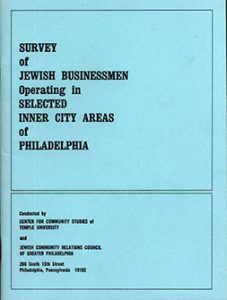 The Special Collections Research Center is pleased to announce the Jewish Community Relations Council of Greater Philadelphia Records are now open for research use. The JCRC records were donated to the Philadelphia Jewish Archives Center between 1976 and 2006 and acquired by the Special Collections Research Center in June 2009 where they were the focus of a two-year processing project. View the online finding aid or guide to the collection on the Libraries’ website.

The Jewish Community Relations Council of Greater Philadelphia (JCRC) was founded on January 30, 1939, as the Anti-Defamation Council but changed their name in 1943. The impetus for the formation of the JCRC was the rise of antisemitism in America after fascism took hold of much of Europe in the late 1930s. Jewish community leaders perceived the need for a unified voice dedicated specifically to fighting antisemitism and protecting the rights of the Jewish Community in Philadelphia. The JCRC’s mission has traditionally been defined as “…helping members of all religious, racial and ethnic groups to work and live together democratically and cooperatively by equalizing their treatment, enlarging their opportunities and deepening their mutual appreciation.” The Jewish Community Relations Council is still in existence and works as a constituent agency of the Jewish Federation of Greater Philadelphia.

The bulk of the records span JCRC history from its founding in 1939 through the mid-1990s. Subject strengths include the struggle against antisemitism and racism in any form, including violence, vandalism, and propaganda, or in any aspect of society, such as education, employment, and housing. Other well-documented subjects include prayer in schools, interreligious relations, the relationship between the black and Jewish communities, Holocaust remembrance, Soviet Jewry, and the state of Israel.

Of particular interest are data, surveys, and compiled reports on the admissions practices of Philadelphia’s professional schools in the 1940s.

Also noteworthy are records pertaining to the Black-Jewish Loan Fund, a JCRC–created program which offered low or no interest loans to members of the black community interested in purchasing Jewish-owned business in neighborhoods of shifting demographics.

The Jewish Community Relations Council of Greater Philadelphia (JCRC) was established by B’nai B’rith in January 1939, but was originally known as the Philadelphia Anti-Defamation Council (PADC). The organization changed its name in May 1944, to better reflect its dual mission to fight anti-Semitism and organized bigotry, as well as to promote intergroup understanding and cooperation. Although the JCRC developed into an organization that worked to advance both of these goals, the earliest records show their focusfrom 1939 through the end of the Second World War was on investigating and combatting anti-Semitism.

Prior to the Japanese attack on Pearl Harbor in December 1941, conspiratorial ideas regarding Jews increasingly became intermixed with an isolationist and nativist sentiment that hoped to keep America strictly neutral in the growing conflict in Europe and Asia. A graphic example of this came to the attention of the PADC on April 17, 1941.

Initially referred to as the “new pro-Nazi circular,” correspondence shows that Maurice Fagan, executive director of the PADC, was in contact with the Anti-Defamation League (ADL) and other groups who were investigating its appearance in Philadelphia. An ADL contact revealed that a large number of these circulars were sent to “H. L. Smith” of 2218 Pine Street by “M. Slauter” of 715 Aldine Ave., Chicago. A few days later, Fagan learned that the “Uncle Sam crucifixion circular” was the “brain child” of Newton Jenkins of Chicago and that there were reports of the circular appearing in Oregon and New York. A memorandum from April 24, described 715 Aldine Ave. as a “clearinghouse for anti-Semitic material” and connected Newton Jenkins with Elizabeth Dilling, a right-wing activist and supporter of isolationism.

An April 27 American Jewish Committee report, orchestrated by George Mintzer, details an investigation of the 715 Aldine address and the individuals associated with the case. While the address turned out to be a boarding house and M. Slauter to be a fictitious name, the investigator discovered the circular was printed by John Winter, co-owner of a Chicago printing company that had previously been investigated by the Federal Bureau of Investigation for connections with the German American Bund, the National German-American Alliance, and other “front organizations associated with the Nazi movement.”

A second circular began appearing in May that shared the same artistic and thematic style as the first. A May 15 letter from Joseph Roos to Maurice Fagan and others, states that Gustav A. Brand was very likely the artist behind both circulars. Roos states that he knew Brand well and that Brand was a former Chicago City Treasurer who “has constantly been under fire because of his strong Nazi language.”

On May 29, Maurice Fagan sent a letter to the Philadelphia office of the F.B.I. with an update on the investigation into the circulars. This letter appears to be the last action taken on this case, but the records of the JCRC contain many other examples of PADC investigating and exposing cases of anti-Semitism in the Greater Philadelphia region.

This is the third post of an occasional series highlighting the work of Philadelphia’s Jewish Community Relations Council (JCRC). The records of the JCRC, housed in Temple University Libraries’ Special Collections Research Center, are currently being processed and will be available for research in 2018.

On March 14, 1939, Detective Sergeant Jacob H. Gomborow assigned six detectives from the Philadelphia Bureau of Police’s radical squad to attend a meeting organized by the Committee for Racial and Religious Tolerance held at the West Philadelphia branch of the YMCA at 52nd and Sansom Streets. The committee was an interfaith group sponsored by well-known clergy and politicians including Daniel A. Poling, Rufus M. Jones, C. Davis Matt, and Francis J. Myers. Prior to the meeting, Gomborow had received information that a group of Nazis were planning to infiltrate the tolerance gathering and instructed detectives to sit in the audience to monitor the meeting for any disturbances. The detectives witnessed a number of persons heckling the speakers, making slanderous remarks against Jews, and nailing anti-Semitic literature and posters to the walls. One of those men, William J. Rigney, stood up repeatedly during the meeting, interrupting the speaker, proclaiming that “Hitler is right in what he is doing to the Jews” and “it is the Jews own fault.” The meeting was abruptly adjourned as a result of the disorder caused by these men. As they left, the detectives observed these same men distributing leaflets promoting racial and religious hatred and pasting anti-Jewish stickers on cars and store windows in the surrounding neighborhood.

Detectives arrested eleven of the “Nazi strong armers” who were subsequently charged with inciting a riot. In the early morning hours of March 15, three others were arrested at City Hall, including Thomas A. Blisard, Jr. and Joseph A. Gallagher, while they were attempting to secure the release of those arrested outside the tolerance meeting. Joseph A. Gallagher, chairman of the Anti-Communist Society of Philadelphia, a group founded by the West Philadelphia High School teacher and Nazi sympathizer Bessie “Two Gun” Burchett, protested the arrests, claiming they were a “frame-up.” Gallagher also denied the literature found in his car, which included copies of the Father Charles E. Coughlin publication Social Justice, was anti-Semitic propaganda. Thomas A. Blisard, Jr. (aka Blissard or Blizzard) and his family were well known in the community and to police as rabid anti-Communists and self-described Coughlinites. At the time, Blisard was chairman of the Philadelphia Committee for the Defense of Constitutional Rights, a group originally formed to protest against the radio station WDAS. The station had dropped Father Coughlin’s broadcasts when he refused to provide advance scripts of his addresses. Blisard’s father made use of tolerance meeting arrests to further their cause, printing and circulating fliers publicizing the “persecution of gentiles” suffered at the hands of an “organized gang of Jews.”

Recently prepared for research use, the Jacob H. Gomborow Papers, housed in Temple University Libraries’ Special Collections Research Center, document Gomborow’s activities as an officer and detective in Philadelphia’s Bureau of Police, responsible for leading the bureau’s radical squad in their investigations of anti-Semitic, subversive, and radical groups in the 1920s, 30s, and 40s. View the online finding aid or catalog record to learn more about the Jacob H. Gomborow Papers or to request access to the collection in the SCRC reading room on the ground floor of Paley Library.