Temple University Libraries was pleased to be a part of the celebration of the 150th anniversary of the founding of Grace Baptist Church (now of Blue Bell), recognizing the deep connections the University has with that congregation.

In the 1870s, the fledgling congregation pitched its tent and then built its first building at the corner of Berks and Marvine—now under Temple’s Gladfelter Hall. In 1882, they called the Rev. Russell Conwell from a small congregation in Lexington, Massachusetts, to become their pastor and changed the history of Philadelphia.  Conwell’s ability to inspire, to build, and to create and recreate institutions included not only Temple University, but also Greatheart and Samaritan hospitals and the Samaritan Aid Society, among others. Starting in 1884, Grace Baptist Church facilities hosted the first night classes of what would eventually become Temple University.

Shortly after Conwell and his family arrived, he and the congregation determined to build a larger building, and in a leap of faith, bought the land at the corner of Berks and Broad sts in 1886. Faith was also required to raise the funds to build the Temple. Groundbreaking took place in 1889, the building, an example of the Victorian Romanesque-revival style, was designed by architect Thomas P. Lonsdale, and Grace Baptist Church dedicated the building for worship on March 1, 1891.

With a seating capacity of 4600, it was at the time one of the largest Protestant church buildings in the United States. The Temple served as the congregation’s home for the next eight decades, until they sold the building to Temple University in 1974 for a little over a half-million dollars. It hosted worship services, baptisms, weddings, funerals, Sunday School classes, community meals and events. At the same time, Temple celebrated scores of commencement ceremonies there–and Russell Conwell’s life at legacy during his funeral in 1925. The Rev. Martin Luther King, Jr., spoke at the Temple in 1965 in support of the desegregation of Girard College.

The building was certified by the Philadelphia Historical Commission as an historic building in 1984, and in 2003 it was designated by the American Institute of Architects as a Landmark Building. The University renovated the Temple to become its performing arts center, opening in 2010. Restored by the architectural firm RMJM in Philadelphia, it includes Lew Klein Hall, the main-stage space, in what had been the church sanctuary, featuring a thrust stage with seating for about 2,000 on three sides. Most of the building’s 140 stained-glass windows can be seen from the theater.

Sixty congregation members and friends visited Temple campus on May 1, 2022, to tour the Temple, visit Rev. Conwell’s grave, attend a reception and self-guided tour in Charles Library, and view an extensive pop-up exhibit featuring primary source material from the University Archives documenting Conwell’s life and the congregation’s early history. A selection from the exhibit remains on display in the Special Collections Research Center reading room through May.

Every year, the Ginsburg Health Sciences Library is pleased to work with the Lewis Katz School of Medicine (LKSOM) to create a display for their Alumni Weekend. Entitled A Walk Down Memory Lane, this two-table display features enlarged images from the ‘landmark’ reunion years — those experiencing their 25th and 50th reunions. Library staff create this display using the resources available through Temple University Libraries’ Special Collections Research Center (SCRC) and their online digitized library of yearbooks. The yearbook for LKSOM, The Skull, is available to browse online all the way back to 1925! Ginsburg Library staff download high-quality images of landmark years that are posted on display boards for alumni to view. In addition we bring print copies of the yearbook, in 5-year increments, going back 60 years, from the library’s print collection.

This year, everything changed due to COVID-19. LKSOM’s Alumni Weekend was originally scheduled for the weekend of May 1-2, 2020. When it was canceled to adhere to social distancing guidelines, library and alumni staff brainstormed the idea of moving the yearbook highlights online. Staff at the Ginsburg Library worked together to create a website, which features the landmark 50th and 25th year reunions. We curated representative photos from the SCRC digital yearbook collection linking directly to the yearbook and the history for each class.

Another page directs viewers to digital copies of The Skull in increments of five years for the last 60 years. 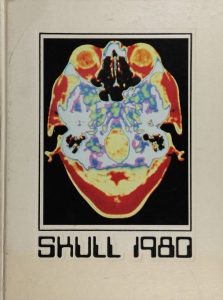 Although alumni cannot be together in person to celebrate this year, we hope that the work done by these three units helped to create a virtual trip down memory lane!

A virtual welcome to all Temple University alumni!

We offer these resources to help celebrate your time at TU, jog your reminiscences, settle wagers, and reinforce memories those great times on campus. 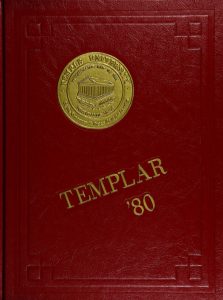 and coming soon, we will start adding runs of Temple News.

To see how the Ginsburg Health Sciences Library uses these resources to celebrate reunions at the Lewis Katz School of Medicine, take A Walk Down Memory Lane.