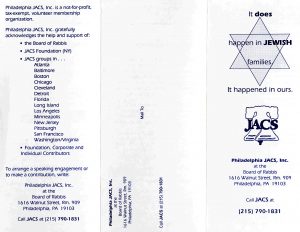 For years, there was a widely held belief amongst many members of the Jewish community that Jews were immune from alcoholism and addiction. According to Rabbi Abraham Twerski, a psychiatrist specializing in substance use disorder, “Any other diagnosis [was] acceptable…even schizophrenia.” This belief became untenable in the 1970s as more and more afflicted Jews could no longer be ignored. Some within the community sought to bring to light the pervasive denial while removing the damaging stigma associated with substance abuse. At the forefront was Dr. Twerski. He spoke publicly, advocated for the revision of the 12-step recovery model to fit Judaism, and founded the Gateway Rehabilitation Center in 1972. More advocates joined the fight not long after. In 1980, a group consisting of recovering Jews and their families called Jewish Alcoholics, Chemically Dependent Persons and Significant Others (JACS) formed in New Yok City. The group dedicated itself to encouraging and assisting Jews suffering from substance use disorder and their families while promoting knowledge and understanding of the disease as it involved the Jewish community.

Around the same time in Philadelphia, members of the Jewish Family and Children’s Agency, the Board of Rabbis of Greater Philadelphia, and other community leaders formed the Chemical Dependence Task Force. While the task force was able to plan and execute some amount of recovery programming and education, the group was only able to meet periodically due to their primary responsibilities. Sensing the need for an organization dedicated solely to promoting substance use disorder education and recovery in the Jewish community, task force members, along with other recovery community representatives, united to form the Philadelphia branch of Jewish Alcoholics, Chemically Dependent Persons and Significant Others. While initially associated with the NYC branch, Philadelphia JACS became their own entity by incorporating in August 1984. Philadelphia’s mission remained similar to NYC’s JACS programs including raising awareness through the media; offering yearly retreats to bring the afflicted and their families together; and starting AA, NA, and Al-Anon meetings in synagogues around the area. 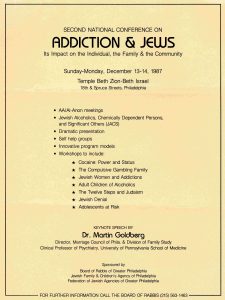