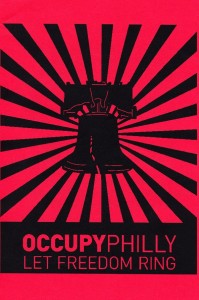 In September 2011, Occupy Wall Street began its protest in New York’s City’s Zuccotti Park, and quickly gained widespread popular attention.  As a protest movement against economic and social inequality and corporate greed, the group touched a nerve with people worldwide affected by the economic crisis. By October of 2011, Occupy groups existed in over 80 countries, although the majority were located in the United States. 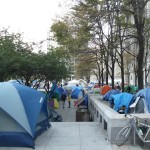 Occupy members, archivists, and other interested groups have tried since 2011 to document the movement and collect historical evidence related to the many Occupy groups. Because of its decentralized and non-authoritarian nature, this has proved enormously difficult. The digital nature of many Occupy materials have also caused difficulties in preserving and making available records of the movement. Emory Libraries’ Digital Scholarship Commons has collected over ten million tweets from the Occupy Wall Street group for data analysis, and WBAI radio station in New York has preserved and made accessible audio files related to the group. A 2012 New York Times article detailed efforts to collect records associated with the Occupy Wall Street, while Harvard collected and created a finding aid for records of the Occupy Harvard group. 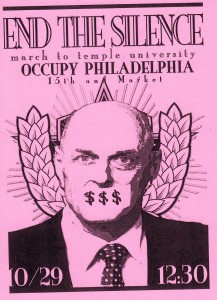 The Special Collections Research Center received materials in physical and digital form from the Occupy Philadelphia group. The Occupy Philadelphia Records  include organizational records, fliers and ephemera, song and chant lyrics, journals and newspapers, clippings, and digital materials including photographs and videos, documenting the Occupy Philadelphia movement as well as other Occupy and protest movements. Much of the material is graphically striking, and expresses the tone and message of the movement in artistic and eye-catching ways. Both the physical and the digital materials can be viewed in the SCRC reading room. An advance appointment is recommended for viewing digital files. 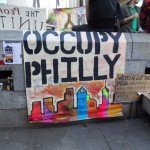