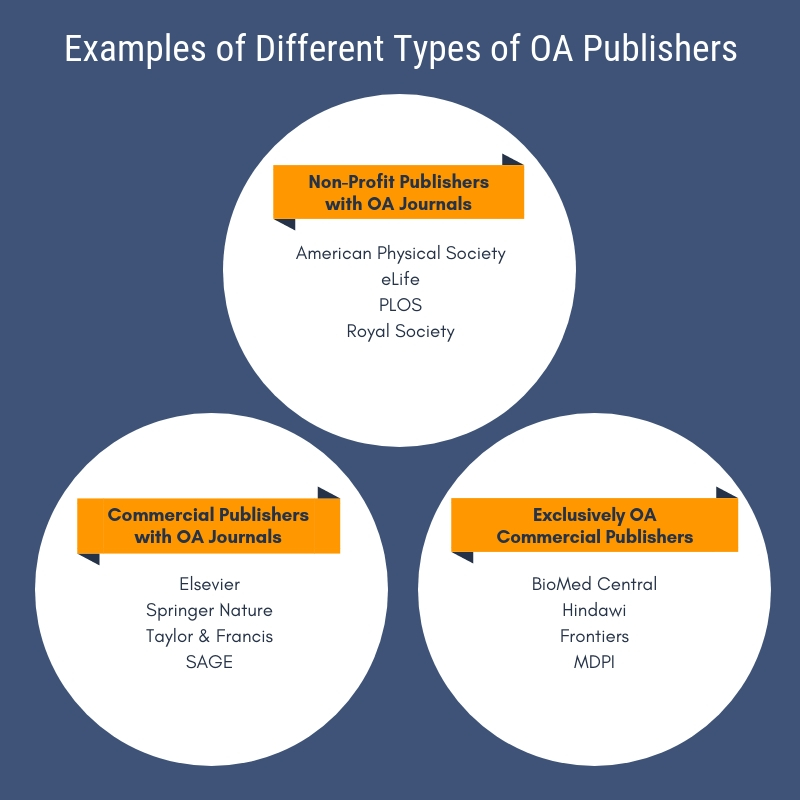 “Types of OA Publishers” by Annie Johnson is licensed under CC BY 4.0.

This week is Open Access Week, a yearly international celebration that aims to increase awareness about open access (scholarship that is free to read and reuse). Most academic work is locked up behind a paywall, available only to those who are affiliated with a college or university. One way researchers can make their work more widely available to readers is by publishing in an open access journal.

Nonetheless, there are a growing number of exclusively open access journal publishers whose names may be less familiar to researchers. Here’s a brief run down of some of the major open access publishers you might encounter:

eLife
eLife is a non-profit OA publisher/journal that was founded by Howard Hughes Medical Institute, the Max Planck Society and the Wellcome Trust is 2011. They publish scholarship in the life and biomedical sciences. Some articles published in eLife include ancillary materials, such as the decision letter from the editorial team with suggestions for improvement, as well as the authors’ response to that letter. Peer reviewers may also choose to reveal their identities to authors. In addition to traditional journal content eLife runs a magazine which includes editorials, interviews, and podcasts. eLife is one of the most prominent publishers to criticize the journal impact factor. As a result, they do not report on or promote this metric.

PLOS
Founded in 2001, PLOS (Public Library of Science) is a non-profit publisher that publishes seven journals. Its flagship journal, PLOS ONE is known as a “mega journal” because of the large number of articles it publishes (22,054 papers in 2016 alone). In 2014 PLOS implemented a new data policy, in which they require that all researchers make the data underlying their work fully available.

BioMed Central
Based in the United Kingdom, BioMed Central (BMC) was founded in 1999 and publishes over 300 journals. It is now owned by Springer Nature. Temple University Libraries is an institutional member of BMC, and automatically covers 50% of the total APC for all Temple researchers who submit.

Frontiers
Frontiers Media was founded in 2007 and is based in Switzerland. It currently publishes sixty-three open access journals in a range of disciplines.

MDPI
Founded in 1996, the publisher MDPI (Multidisciplinary Digital Publishing Institute) is based in Switzerland and publishes 203 open access journals, mostly in the sciences.

PeerJ
Launched in 2013, PeerJ is a publisher of two journals: PeerJ (which focuses on the biological, medical and environmental sciences) and PeerJ Computer Science. They also have a repository for preprints, called PeerJ Preprints. In the beginning, PeerJ relied on a membership model to make money, in which authors would pay one fee and they could publish for free in PeerJ for the rest of their careers. They have recently changed their model so that authors can pay an article processing charge (APC) instead of purchasing a lifetime membership.

One last note: all the publishers profiled here are members of the Committee on Publication Ethics, and their journals can be found in the Directory of Open Access Journals.