Philadelphia paper manufacturer, Leon J. Perelman started collecting mechanical penny banks in 1958 after visiting a hobby show in Fort Madison, Iowa. Eventually, he amassed over 3,000 banks, tin and cast iron toys produced from the late 1860s through the 1910s. First patented in 1865, mechanical penny banks were designed to encourage children to save money by providing entertainment and amusement with one or more mechanical actions when a penny was deposited in the slot for safekeeping. Perelman’s collection was considered the largest private collection of antique toys in the world by some estimates. In addition to penny banks, Perelman’s collection also featured cap pistols, dolls, cast iron vehicles such as fire engines and stage coaches, and a reference library containing patent papers on mechanical banks. Although there is no mention in the official collection guide, the museum also contained antique glass and agate marbles. 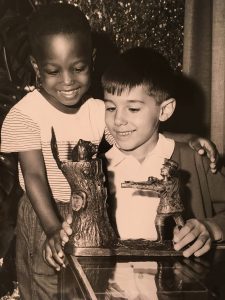 Nathanial McDaniel (left) and Chris Cherubini (right) play with mechanical bank at Cayuga Federal Savings and Loan Association, 11th and Market Streets Branch, 1964Perelman initially used his Merion, Pa., home to display his antique toys, erecting an addition in 1962 to accommodate his growing collection and offer public museum hours. In a 1967 agreement with the Philadelphia Redevelopment Authority, Perelman purchased the historic Abercrombie House near the corner of 2nd and Spruce Streets to create a new museum space. The four-story brick house, named for Royal Navy officer Captain James Abercrombie who purchased the site in 1758 and built the home shortly thereafter, was considered one of the largest Colonial- era homes in the city. The Philadelphia Historical Commission designated the property to the Philadelphia Register of Historic Places in 1957. Perelman’s restoration of the building was part and parcel of the mid-twentieth century urban renewal taking place in Society Hill and other neighborhoods throughout the city. Renovations took two years at a cost of $300,000, with John Frederick Lloyd serving as the architect. The new Perelman Antique Toy Museum celebrated its grand opening in January 1969 with the Director of the United States Mint Eva Adams and Mayor of Philadelphia James H. J. Tate in attendance.

For nearly twenty years, the Perelman Antique Toy Museum amused children and adults alike, but on August 5, 1988, Perelman lost his marbles in a smash and grab job that would close the museum forever. Although the local press did not report on the museum heist in the days immediately following the robbery, Maine Antique Digest was able to interview museum curator, Michael Tritz about the day’s events. According to Tritz, he was preparing to open the museum for the day, when the thieves entered the museum, bound and gagged him, and forced him into a restroom. He recounted “I heard one of them upstairs hammering at the display cases. I thought he was getting into all of them . . . but all he could break was the case with marbles in it on the third floor.” The 5/8″ thick bulletproof glass foiled their attempt to steal any of Perelman’s coveted mechanical penny banks. Tritz estimated one of the thieves spent about 45 minutes trying to break the display cases while the other watched the door. Perelman shuttered the museum the day after the robbery. It wasn’t until The Philadelphia Inquirer published a piece on August 31, declaring the “Toy museum is no more,” that antique toy enthusiasts and museum goers learned about the robbery. There is no evidence the thieves were ever caught or the marbles recovered. Within a few weeks, Perelman sold the estimated $3 million toy collection to New York-based art and toy dealer, Alexander Acevedo who dissolved the collection in a series of invitation-only sales to collectors and dealers.

Perelman’s papers, including records related to the operation of the Perelman Antique Museum, and his term as Dropsie University president are now available for research use in the Special Collections Research Center.