The Libraries are celebrating the 50th anniversary of the founding of the Urban Archives with an exhibit,  a screening, and symposium.

In 1967, when Temple University’s history department decided  to collect the records of city organizations in order to document the history of Philadelphia from the Civil War to the present, and more generally represent the urban experience, the faculty may not have imagined how the archives would evolve.   They were interested in gathering raw material for their graduate students’ research use.  Since then the Urban Archives has evolved into the most extensive collection of 20th century Philadelphia history in the region, holding the archives of hundreds of city and regional organizations–from a few to thousands of boxes each.  And it’s holding are used not only by undergraduate and graduate students, but by high school students, scholars from all over the world, the media, documentary producers, and the general public. 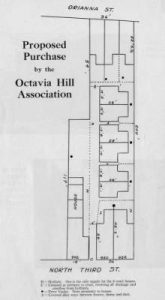 The late sixties was something of a turning point in the study of history.  As Fred Miller, who served as director from 1973 to 1989, put it:  “The archives owes its existence to…the growth within the historical profession of the study of social history; the crisis of the cities, which led to the rise of a veritable urban research industry; and the growth of higher education, during which Temple became a major research university.” Fred arrived shortly after the administration of the archives was transferred to the Libraries (in 1972).  And he was succeeded by Margaret Jerrido, who was head of the archives from 1990 until her retirement in 2007.

It’s striking how true the archives has stayed to its original purpose, described in the 1968 History Department press release announcing the archives as “creation of a new manuscript collection focusing on urban life and development and drawing on the Philadelphia metropolitan area since the Civil War. The collection will collect institutional and individual records which will illuminate ethnic and racial groups, social welfare, crime, education, religion, economic development, and political activity.”  Neighborhood association records became a strength, and in the early 1980s a major initiative to collect labor records increased those collections.  And the archives continues to grow, adding, in the past few years, the  archives of Occupy Philadelphia, the Philadelphia Zoo, the Weavers Way Co-op Records , and the Philadelphia Association of Community Development Associations to name a few.

Many of the earliest collections gathered in between 1967 and 1969 by the history department, the first director Phillip Benjamin, and a team of graduate students  remain the most frequently used, including the first major collection:  the records of the Housing Association of the Delaware Valley.  The Urban Archives has also become know for holding the photograph and clippings library of the Philadelphia Evening Bulletin–and for being the premiere location for the study of MOVE and the MOVE bombing in 1985. 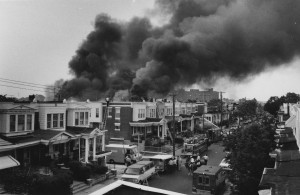 Representing the hundreds of graduate students, from Temple, Penn, Yale, Duke, and across the country and the world, who have used the archives in their work, is Matthew Countryman, whose dissertation, researched at the Urban Archives among other archives in the city, became the monograph Up South: Civil Rights and Black Power in Philadelphia. Matthew is Associate Professor of History and the Director of the Arts and Citizenship Program at the University of Michigan, and we are also grateful to him for his work with us on our Civil Rights in a Northern City website. 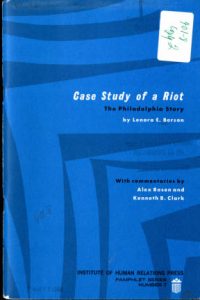 At the symposium, we are privileged to have Herb Bass, Emeritus Professor of History, with us, who was present at the creation, to tell us more about that.  Matthew Countryman, Margaret Jerrido, Ang Reidell (Education Specialist, National Archives and Records Administration-Philadelphia); Frank Hoeber;  Joe Slobodzian, a Philadelphia Inquirer reporter; and Sam Katz from  History Making Productions.  We asked the to  talk about their time with the Urban Archives and perhaps speculate where the next fifty years should take us.