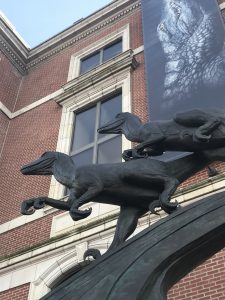 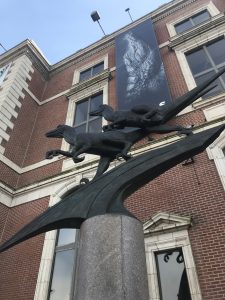 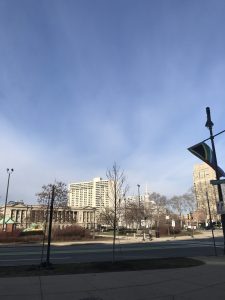 Modern day Philadelphia is quite different than the Cretaceous period

Enkidu: As someone who was raised by animals, surprisingly I know little to nothing about dinosaurs.

Deinonychus: Well, I could tell you a few things. According to my wikipedia page, I am a swift, meat eating dinosaur from the Cretaceous period. And my name means “terrible claw.”

Enkidu: That’s rather fascinating, but you don’t seem so terrible to me. In fact, you remind me of someone I knew quite well.

Enkidu: I had a friend who was like a brother to me. He was the king of a beautiful city called “Uruk.” Only problem was that he was sort of a tyrant. He exerted the utmost force over the people he ruled, to the point where he would rape peoples’ wives. A lot of people thought he was terrible.

Deinonychus: He sounds terrible. I may be a carnivore, but no still means no.

Enkidu: You’re right, there’s really no excuse for his behavior.

Deinonychus: I think you and I are probably more alike than myself and your tyrant brother friend.

Enkidu: What makes you say that?

Deinonychus: You mentioned you were raised by animals. I happen to be of the kingdom animalia.

Enkidu: Well, I was raised by animals but a prostitute nurtured me and made me more human than animal.

Deinonychus: That makes us all the more similar! For me, it is the city of Philadelphia that’s made me more human than dinosaur. I’ve observed everything that goes on here since I was built as a tribute to all of the important developments made in the study of paleontology.

Enkidu: Are you calling the city of Philadelphia a prostitute?

Deinonychus: I never said that. I’m just noting that we were both socialized by external forces to behave like humans.

Enkidu: What would you say your best human quality is?

Deinonychus: That’s an interesting question. Probably my ability to understand the importance of science, especially in this day and age. I never expected to be immortalized as a statue, but people seem to value knowledge about things like history, biology, and evolution. It’s all the more important to know about these things when the idiot president of the United States doesn’t have a clue.

Enkidu: Wow, you know a lot about politics for a dinosaur.

Deinonychus: I take offense to that. It’s all about staying informed. Living in this city allows me to do that.

Enkidu: You’re right. You’ve inspired me to take my own appreciation for nature and turn it into motivation to learn about science.