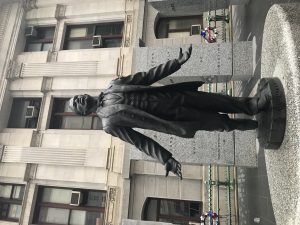 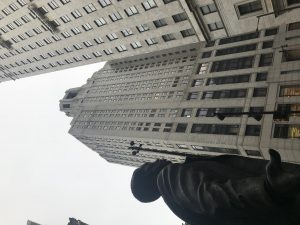 Caption from the perspective of the statue: staring up at a new world for African Americans far above the skyscrapers and the clouds 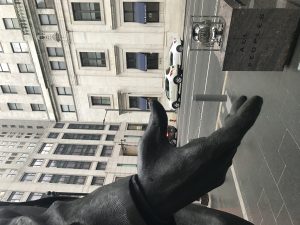 Caption from the perspective of the statue: reaching out, hand in hand, brother to brother, as “all peoples” are equal

Script between Octavius Catto (O) and the statue of Enkidu (E)

O- Good day sir, what is your opinion on the issue of slavery?
E- I do not know what that entails. Could you explain it to me further?
O- Are you not familiar with the white man enslaving the black man for his own personal gain through harsh and inhumane methods?
E- I am not. I was raised wild in the wilderness. I am still being introduced to these new societal concepts such as the one you just mentioned.
O- Have you learned about war yet?
E- I know violence and I know how to fight, but the idea of fighting your own kind over disputes such as land seems foreign to me.
O- In this case it was over skin color. You may have been alive in a barbaric time where people fought to the death with archaic weapons, but in my time a country split in half over an issue as innate as the color of one man’s skin.
E- Did the gods not punish the white men for committing these atrocities?
O- There is only one God, if he exists, and he did nothing to stop this bloody battle.
E- Who won this war between brother and brother?
O- The side that supposedly fought for equality won; however, that was just the beginning in a long and arduous battle that has still yet to be conquered.
E- How so? If they were victorious, did they not get to pillage the losers and disperse goods to all?
O- Many of their words were pretense; it was still a long fought struggle for true equality, and I was a martyr in this cause.
E- I was also killed before my time; the gods gave me a slow and painful death by illness as a punishment, and I died in front of my best friend.
O- The only thing worse than dying a slow and painful death is dying before the battle is over. I could have done much more to help but I was killed unjustly.
E- You have died a true hero and for that you will be rewarded in your afterlife and honored by generations to come.
O- I hope for my sake you are right. And I hope that the issues of my day have dissipated so that I did not die in vain.
E- From where do you originate?
O- I am from Philadelphia, a city that literally translates to “brotherly love.” Although the sense of comradery was pitiful during my era. And you?
E- I am from Uruk, one of the first cities developed, where civilization first took its roots.
O- It is ironic how during a span of thousands of years, humans seem to not progress in their ethics and in fact may regress and repeat the mistakes that should remain buried in the past.
E- Yes, mankind is an unusual and unkind species. Although sin is ravenous and men are ignorant and naive, we still must admire their great achievements and successes. For example, the construction of cities, such as Uruk or your Philadelphia, is a monumental task.
O- Yes, you are right. However, the reconstruction, as it was coined, of civilization after the Civil War I lived through, was not a glorious feat. Reconstruction happened at a slow, tedious pace, and never really reached completion at all.
E- I am sorry you had to see your fellow men cruelly murdered and your society crumble.
O- You as well. I am sorry you had to be introduced to a world of bigotry and hate instead of continuing to live in an ignorant bliss.
E- Ignorance may be bliss, but knowledge is power. I would rather be hardened by the world but in turn gain worldly knowledge than continue to live as a savage.
O- You are right. I was considered an intellectual by many during my time, and I was one of the few African Americans who could read or write.
E- Be proud of your achievements and how you represented your people; they should be grateful to have a leader as strong and brave as you, especially if you died for your beliefs.
O- And you should be proud for being such a loyal and kind friend. You unrelenting dedication made you a hero and a trusting companion.
E- Thank you for teaching me about your culture. I guess despite a couple thousand years between us, we are not that different after all.
O- Yes, times may change, but mankind will always inherently be the same.