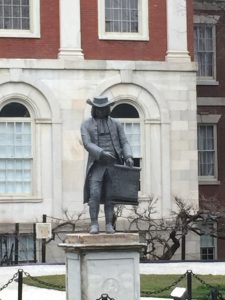 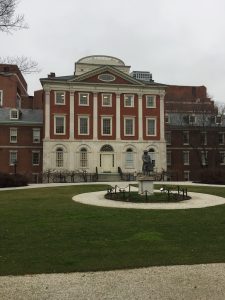 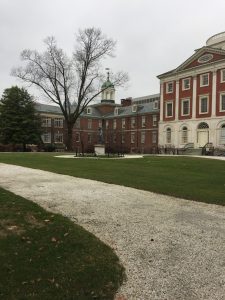 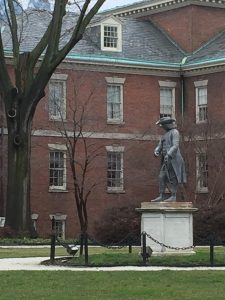 The Boul Willy P outside the Pennsylvania Hospital because he’s that fly.

WP- The King of England, Charles II, owed my pops a fat stack and half, so he wrote me this charter for the biggest piece of land can imagine. And its all in the New World, so I came over here thinking that I better get to establishing a religiously tolerant settlement. Seems pretty reasonable to me, but everywhere I’ve been so far the King has shoved his religion down everyone’s throat.

G- Is that a jab at me? I couldn’t care less about what religion my people followed as long as they obeyed my every command.

WP- That sure sounds like you expected to be worshiped like a god, don’t you think? You were a tyrant!

G- I ought to destroy you!

WP- I don’t mean to come at you, but you heard about this thing called democracy?

G- Penn, I’m from like 2800 BC, The Greeks and Romans didn’t start trying that til the 5th century BC.

WP- Well I really think it’s going to be all the rage in the future, but might have to be amended or something eventually. That’s what I think is missing from Locke’s take on a constitution

G- Oh F-uruK, I gotta write that down then!…Let me get my tablet out, How do you spell that?

…Is that the iClay MMCM?

G- Nah, it’s the MMDCCC. This has a way better inscription resolution.

WP- Dope! I thought about signing a 2-year contract with the East India Company, but I was able to negotiate this sweet deal with the local carrier, Native Lenape.

G- I heard they’re not reliable.

WP- Well my deal with them was actually upheld better than any other European-Amerindian treaty. Both on their end and on mine. I heard rumor somewhere that there was going to be a huge merger between 13 smaller names at some point and I’m in favor of that.

G- Whatever works for you.

WP- Good talk, let me know what you think of that democracy idea. Your input is important to me.