Statue of Friedrich Von Stuben behind the Art Museum 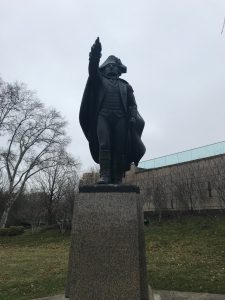 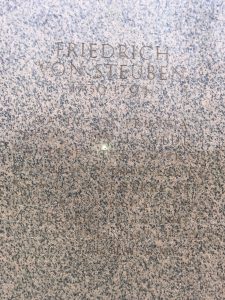 The view from the eyes of the statue 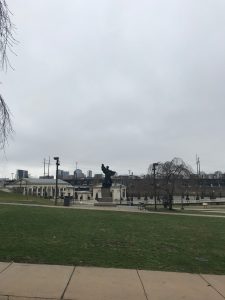 Friedrich Von Steuben: “Hello, yes you over there. Come close and tell me your name. I would come to you, but I seem to be stuck in place and I cannot move a single muscle!”

Enkidu: “I am Enkidu from the magnificent city of Uruk. Who might you be?”

Von Steuben: “I am Friedrich Von Steuben, one of the founding fathers of the Continental Army. The ground you walk on now is the same land I fought for centuries ago as my fellow comrades and I fought for the right to be free from the tyranny of the British empire.”

Enkidu: “What makes you stand up here for all eternity encased in metal while many others have been forgotten over time. What did you do in your life that made you deserving of this honor?”

Von Steuben: “I played a significant role in transforming a band of misfits into an army that could take down the might of the British. I taught the men how to train and how to be a viable army that can defend its land. As I have stood here, I have seen the once small force we had turn into one of the most dominant militaries in the entire world with many great victories and unparalleled success. You must know of such great accomplishments in battle like this, do you not?”

Enkidu: “During my life, I saw the strongest man to have ever existed and one of the bravest warriors to have walked the face of the earth. My friend and companion, Gilgamesh, had the power of your entire army crammed into one man.”

Von Steuben: “It sounds like this Gilgamesh should be honored in many statues throughout the world to display his strength and skill and make it known to everyone his accomplishments. Why are you honored in a statue here and he is not?”

Enkidu: “My friend decided to honor me after my death for the sacrifice I made for him.”

Von Steuben: “Making a sacrifice for those around you is one of the greatest honors that any individual may do. I see why you are composed of the finest materials for all eternity. Tell me more about this sacrifice that you made for a friend!”

Enkidu: “Gilgamesh and I were both companions and the closest of friends. We went to battle together and slayed the demon Humbaba, one of the fiercest creatures of them all.”

Von Steuben: “That sounds like an incredible feat of strength and collaboration. That sounds like what our colonial army did to the dictatorship of the British. Both were feared, but with determination, they were able to be defeated. However, what was the sacrifice that you discussed earlier?”

Enkidu: I made the ultimate sacrifice for my companion. My life was taken from me as punishment to Gilgamesh. After my physical body failed me, Gilgamesh constructed a monument to honor my memory and I have called this body home ever since. I have been moved across the world for millennia and have seen many different landscapes, but even now as my home has moved to Philadelphia, I never forget about my friend Gilgamesh.”

Von Steuben: “I can see you not only understand friendship, but you also understand brotherly love! You will fit right at home in the city of Philadelphia.”

Enkidu: “Thank you kind sir. You have helped me realize that this new home might just be the perfect place to call home as long as my statue may stand.”

Von Steuben: “I hope we are both remembered for the good that we did in this world and not forgotten like many of our brethren are through the progressions of time. I know that you will not be forgotten as long as I stand here and I hope and many others will remember me for my best accomplishments to this nation we call home now. Farewell, my new friend.”

Enkidu: “I hope so too. Goodbye to you as well.”