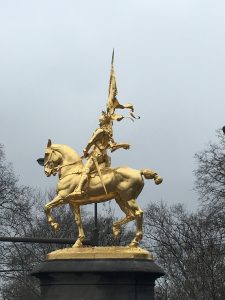 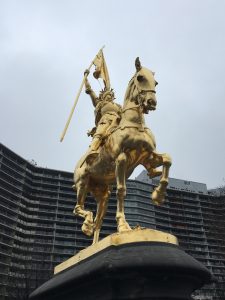 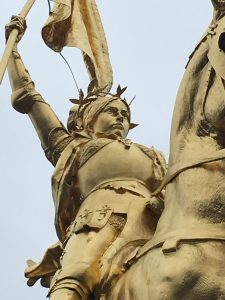 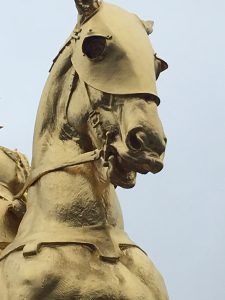 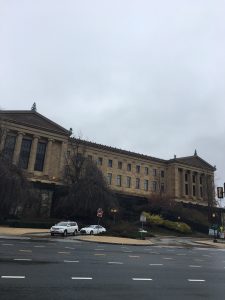 Conversation between Joan of Arc and Enkidu

Joan: Hello friend. Welcome to the world of civilization and war.

Enkidu: The animals would say those two do not coexist.

Joan: Ah, but we are not the animals. We are different from them in that we can speak for ourselves and demand respect. We are capable of rising up against those who would deny us our rights and autonomy. It became clear to me as a young girl that no one should be able to exert themselves over others unjustly, and I was inspired by the saints to uphold that belief by leading my people. We have a duty to serve if we are capable, do we not?

Enkidu: I suppose we do. I never knew a people though. My “people” was my herd, but they did not understand my humanity. Once I joined society, I could not interact with them but to kill. The only one I have ever known to serve is Gilgamesh, my friend and my king. He taught me the ways of humanity and brotherhood. We were brother in arms, fighting together to prove ourselves to the gods.

Joan: But did you ever prove yourself to yourself?

Enkidu: Alas, I did not. I did not die a noble death, but one of illness, lying in bed. For the acts that Gilgamesh and I committed in the name of the gods and to earn their favor earn scorn from some. They sent illness to me as punishment to Gilgamesh. My time as a member of society was too short for me to ever prove anything to anyone. But I rest easy knowing that I was able to spend my time in the companionship of Gilgamesh. Surely being satisfied with my time of Earth, even if I failed to prove my noble character. Might there be nobleness in my satisfaction that I was able to serve Gilgamesh? Does one not get lonely as the leader?

Joan: Yes, there are some elements of loneliness there. But really I knew I had my people behind me. The men who stood at my command did so out of respect and love for me, as well as respect in love for the saints who spoke through me. And with those saints I was never alone; they would never allow me to be, for they knew I needed their wisdom as well as their companionship. The only moment I felt alone was at the end, though not because my people did not support me, but because I was so isolated in a foreign land. My time was short as well. Though different in so many way, you and I at least have that in common. Our power lies in what we could achieve in so little time.

Enkidu: Should it matter how much time one has?

Joan: I’ve wondered that often. Wondered what my life might have looked like had I not been executed. Though I do not regret any of what I did in life, it is painful to think of all else I might have done for France, for the world. Though I found my purpose in the greater picture, I have to wonder whether or not I achieved the personal fulfilment that you did. I died for the greater good of France, and it is only now in death that I can reflect selfishly on the life I wish I could have had basking in celebration after the war.

Enkidu: I, too, wonder what else my life would have held had I survived. I know my brother went on to seek immortality, a cause which he failed. I wonder if I would have continued to support him in his quest. I’d like to think I would have accompanied him on the journey. Even if he had failed, which he would likely have done with me there as well, to have more time with him would have been nice. Why do we warriors not get to live full lives?

Joan: It is part of the job description. When you live for others you tend not to live long. Still, we can rest in death knowing that we achieved the impacts in life we had wished to.

Enkidu: True. At least we have found our peace in death.