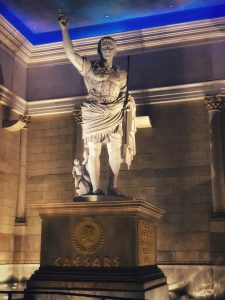 But I am constant as the northern star, Of whose true-fixed and resting quality There is no fellow in the firmament. The skies are painted with unnumbered sparks. They are all fire and every one doth shine, But there’s but one in all doth hold his place. 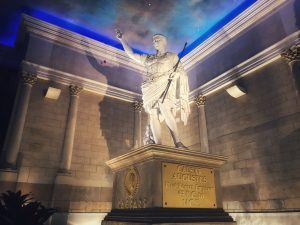 So in the world. ‘Tis furnished well with men, And men are flesh and blood, and apprehensive, Yet in the number I do know but one That unassailable holds on his rank, Unshaked of motion. And that I am he 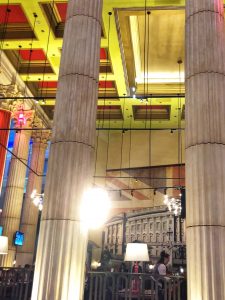 View that Caesar sees: a swarm of people gathering to gamble and maybe eating Caesar salads. They are enjoying their presence at the casino, marching on their own battle to victory or loss (of money).

Enkidu: Caesar, you remind me of someone very dear to me. Although you are not remotely as strong or mighty as him, you have the same confidence and aura. He was someone who captivated the world around him, and there was almost nothing he couldn’t do.

Caesar: Is that so? Who is this person you speak so fondly of?

C: Gilgamesh? Never heard of him. Tell me more, I’m not sure that such a man exists… Stronger than me? Ha!

E: Pitiful human! Gilgamesh is ⅔ god, and I am ⅔ animal! By comparison, you are nothing but a puny human (sighs and looks wistfully into the sky). Gilgamesh and I—we traveled far and wide, experiencing a thrillful journey together. We worked hard to protect the citizens from the Bull of Heaven and the evil Humbaba, but look at what good that did me! I was punished by the gods for no good reason and died a cowardly death. To make matters worse, citizens are no longer worshipping me, and they are having talks about removing my statue. They despise me for what I did, even though I was protecting them!

C: You think your death was bad, just wait until you hear about mine. I was also a ruler of the people, and they loved me. I was the one and only who could rule Rome, no one could compare. Yet, my so-called friends stabbed me 33 times! Even my dearest friend, Brutus, stabbed me. However, like I said, I was the only one fit to rule Rome and the people knew it. After my death, chaos ensued! The traitors were never able to take over like they wanted to.

E: Oh, poor you! You have a salad and a casino named after yourself. Even today, people love you.

E: A hero? I thought I was a hero as well…I just don’t understand my fate. I am punished by the gods and hated by the people. Nobody understands me like Gilgamesh did. I am thankful that he made a statue of me, but he should have explained my story! These citizens, they just don’t know life back then. They can’t understand why I did the things I did. I wish Gilgamesh inscribed my story on my statue so that these people would understand.

C: I’m sorry, I just don’t understand. From what you tell me, it seems like Gilgamesh was the hero, no? Aren’t you just his sidekick? What would your story be if it weren’t for Gilgamesh?

C: You and me, we both did similar things. I once ruled Rome with Pompey. However, he turned on me so I had to go off and kill him and his sons. You see, not so different from your killing of the Bull of Heaven and Humbaba. Here’s what you don’t understand. These people are fickle! They once loved you, but now they despise you. The same thing could happen to me! They could turn and decide that Pompey was the hero and I the villain.  And you have to remember, Gilgamesh erected your statue, not the people!

E: What does that mean for me? If I am not a hero, then what am I? The pity of Gilgamesh?

E: Friendship? I never thought about it like that.

C: And Gilgamesh wouldn’t have either! You need a current recontextualization, talking less about your actions and more on your friendship with Gilgamesh. I have a friend who can help you out.

E: That sounds great! What about you then? You don’t need anything?

C: Me? The people love me at the moment. And if they do change their mind, which I doubt, then I’ll figure it then. Enkidu, you and I are both handsome statues. We are works of art! We are reminders of history. These people, they go off deciding which piece of history that they don’t like anymore and want to get rid of statues. Look at what happened to Robert E. Lee and Roger Taney! They were symbols of leadership for the conservatives and the South. I believe that no matter how the tides change, no piece of history should be erased. We need to do our best to stick around! Removal is absolutely horrid.

E: You’re right. I was built for a reason! I was important enough that someone decided to make me a statue. These people, they can’t take that away from me. I will make them understand!