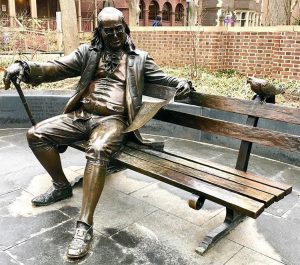 Ben Franklin: “Hello sir, have a seat! My name is Benjamin Franklin, welcome to the city of brotherly love! What’s your name?”

Ekindu: “I am Ekindu. Ah brotherly love, I once had a close friend, but I would call him a brother. His name was Gilgamesh.”

B: “Well I was just reading my newspaper, but this brother of yours sounds much more interesting. Tell me about him!”

E: “We were the most powerful in all of Uruk. Together, we defeated the monster of the Cedar Forest, Humbaba.”

B: “Wow that sounds pretty intense. Not as intense as the American Revolution, where we won our independence from England and I went on to be one of the Founding Fathers of this great nation, but go on.”

E: “The gods were angry with us for slaying the monster, and I was punished by having my life taken from me. At first, I was angry. You see I was raised in the forest and would have lived a long life if it wasn’t for that Shamhat luring me into civilization and allowing me to be corrupted by human nature. But then I realized that if I had never been introduced to human society, I would have never met my brother, Gilgamesh, so I accepted my fate.”

B: “That is some story you have there, mind if I write an article about it and post it in my newspaper, The Pennsylvania Gazette? I think people should hear about this.”

E: “An article? I don’t need an article for people to know about me! Don’t you see me? After my death, Gilgamesh raised me, this massive statue made entirely of gold so my legacy can live on forever!”

B: “I didn’t mean to offend, the gold looks lovely on you. I have to get back to my newspaper now, it was nice meeting you Ekindu. Have a nice day!”