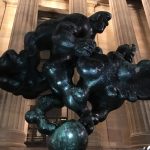 Here you can see Prometheus fighting back against his punishment handed to him by the gods. 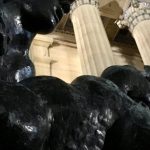 Technically, Prometheus is staring at the vulture who has attacked him day after day. 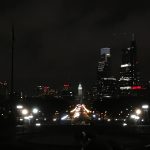 However, Prometheus also has the view of the city if he looks slightly to the right.

Prometheus’s statue and Enkidu’s statue bump into each other at a statue convention and start a conversation.

Enkidu: It truly is an honor to meet you! I have heard the tales of Prometheus’ punishment for years.

Prometheus: Thank you, I have also heard about Enkidu’s adventures in Uruk.

Enkidu: Wow, I cannot believe that you have heard of me. I’m nowhere near as famous as you are. Would you mind me asking you a few questions?

Prometheus: Of course, I don’t mind. Ask away.

Enkidu: I was wondering if you think you are an accurate portrayal of what Prometheus stands for.

Prometheus: Usually, he prefers to have his statues reflect what he has achieved rather than how he was punished, but I am the exception. I feel that I am empowering in a way. I show that you don’t have to just sit there and accept the terrible situations that you may be in. I’m a reminder that you always have the power to fight back against something that has tormented you for so long.

Enkidu: How about your location? Do you think your location on the front steps is fitting or do you believe you should be moved somewhere else?

Prometheus: I like where I am at the moment. I can see a large amount of the city from where I stand.

Enkidu: Why do you think it is fitting?

Prometheus: Well, the reason Prometheus was subjected to his punishment was because he decided to aid humankind. He was looking out for them and their best interests and now I can continue looking out for them. Overseeing their daily lives and inspiring them to do good.

Prometheus: Enough about me. Do you think that you are an accurate representation of Enkidu.

Enkidu: Well, I do believe I am an accurate representation of Enkidu. I absolutely love representing him.

Prometheus: Do you believe that he deserves a statue?

Enkidu: Of course I do. He is mighty and strong. His power should be admired and feared. Why do you sound so critical? Do you not believe that he deserves a statue?

Prometheus: I do not believe he deserves a statue. He has done nothing of true worth. His feats where driven by nothing more than a desire to show others how he was better than them.

Enkidu: How dare you insult him! He is just like Prometheus. He left his home in the wild and set off to help humankind!

Prometheus: Prometheus and Enkidu are not one and the same. Yes, they both left their homes, but Enkidu never did help humankind. He gave up his cause with very little internal conflict after he was beaten by Gilgamesh. He is just a fickle man trying to pretend that he knows what he is doing.

Enkidu: How is he fickle?

Prometheus: He didn’t stand by his decisions. He told Gilgamesh not to go after Humbaba, yet he then encouraged him to do it after Gilgamesh lost confidence in himself. He should have believed in himself and stood his ground. He essentially became a sidekick to Gilgamesh.

Enkidu: Well, when you put it that way it does seem that Enkidu may have gotten caught up in achieving glory and being labeled as a hero.

Prometheus: I am not saying that he was a terrible person, I just do not believe that he has done anything truly deserving of a statue in the public eye. Statues in the public eye should be about people who have shown true bravery and a desire for justice, not power-hungry individuals.