Posted on December 29, 2017 by Jonathan Nyquist

Now available on the Vadose Zone Journal’s “First Look”. The final publication will come out in 2018.

This manuscript took me a long time to get out — partly procrastination, but mainly because I struggled searching for the optimal way to analyze these data.  Much more research is needed to fully understand the connection between subsurface dye migration and changes in GPR response. 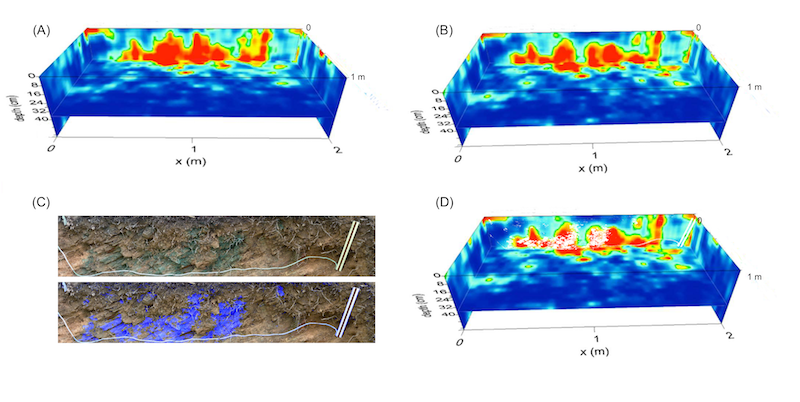 The radar images are a composite of a vertical x-z slice closest to the trench (0.20 m), a horizontal x-y slice at the depth equal to the base of the excavation (0.38 m), and two vertical y-z slices at the x limits of the grid. The patterns of change after the water release (A) and the dye solution release (B) are similar. The scale is normalized to the brightest reflection. The photograph of the vertical excavation face closest to the injection trench is shown (C) with and without the k-means identification of the dye stained pixels for comparison. The pixels classified as dye stained are shown superimposed on the corresponding 3D radar collected after the dye release (D) for comparison.