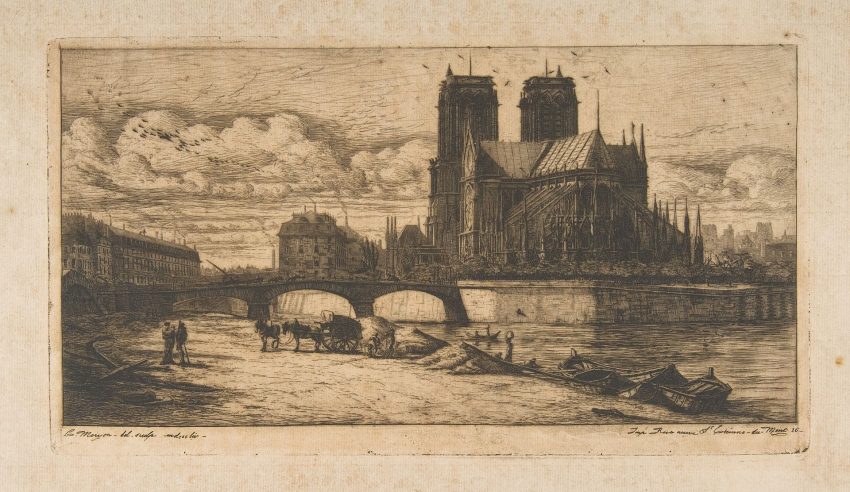 On Monday the images of Notre Dame’s spire and ceiling aflame were too horrific for me to really look at. I couldn’t bare to witness the fall of the spire, which had stood for 175 years and witnessed so much history in Paris. Ultimately, I spent most of Monday and Tuesday avoiding social media because I just didn’t want to see it.

But this week reminded me that the history of art is filled with devastating fires. In 1984, lightning struck York Cathedral causing significant destruction. In Rome, Saint Paul Outside the Walls was, for all intents and purposes, leveled when a man working on roof repairs set a fire in the nineteenth century. This was a particularly sad art historical loss as it was the best preserved Early Christian basilica in Rome. Rouen Cathedral’s spire was struck by lightning in 1822 and the church would again be maimed by Allied Forces’ bombing runs during WWII. Recently, the Wangdue Prodang Dzong in Bhutan was destroyed in a fire in circumstances that parallel Notre Dame. On April 15th, at the same time Notre Dame was burning, there was a fire at the Al-Aqsa Mosque in Jerusalem.

I could continue this litany of accidental fires, but intentional destruction of monuments has a long history as well, and it continues to happen. The Buddhas of Bamyan were destroyed by the Taliban in 2001. During WWII, the British intentionally aimed at the Milan Cathedral during their bombing runs. Although they missed the cathedral, numerous historically valuable buildings, including Santa Maria delle Grazie (the location of Leonardo’s Last Supper), suffered damage. In recent years, ISIS has left a wake of destroyed historical sites in Iraq and elsewhere. The ziggurat of Nimrud that stood for thousands of years and represented important moments in our collective history was bulldozed. First peoples’ sacred landscapes have regularly been destroyed in America, recently with the bulldozing of parts of Standing Rock.

I grieve the loss of all these monuments. When they are ravaged by fire, natural disasters, or neglect a part of history disappears. When buildings and spaces are wantonly destroyed we denigrate the cultures and beliefs of our fellow humans past and present.

Can digital art history help lessen the pain of these losses? Although there is no substitution for the original, digital tools can record these spaces for prosperity. Photogrammetry and orthophotography allow a more mimetic record of sacred and historically important sites. Laser scanning, amongst other digital tools, can capture even the smallest of details. If France chooses to reconstruct the nineteenth century spire as it was, there is good news. In 2015 art historian Andrew Tallon completed a full digital model of the building through laser scanning. In addition, the creators of Assassin’s Creed also built a highly detailed model of Notre Dame for one game of their series. New technologies that accurately documented Notre Dame as it was in the early twenty first century preserved for historical record the roof and spire which was lost this week. Although digital documentation tools, such as laser scanning and photogrammetry, do not excuse willful destruction of cultural heritage sites, such as Standing Rock, it does allow us to preserve for study and memory things that, due to the life cycle of buildings and spaces, may be destroyed or damaged.

France may choose to not reconstruct what was there. Gothic churches were not built in a day or even a decade, we measure the time of their construction in centuries. And although there are good arguments for reconstruction, I also believe that it is perfectly natural to choose to embrace the monument as a living thing. It took over two hundred years to “complete” Notre Dame; even then the original spire was removed due to its precarious state in the eighteenth century and replaced in the nineteenth century. Objects, relic, and liturgical furniture have been added and subtracted continuously over Notre Dame’s history. Adding a new spire, not a reconstruction of the Eugene Viollet-le-Duc design, has already been suggested by Prime Minister Edouard Phillipe, which perhaps is a palatable choice because Tallon and others have preserved the spire digitally.

As of Wednesday, billions of dollars have been donated to help reconstruct Notre Dame. The generosity of people across the world demonstrates the collective cultural value of the cathedral.   But perhaps we should also consider giving money to art historians, archaeologists, and other scholars to fund projects that digitally document and preserve our cultural heritage. Supporting projects that digitally preserve important, but less well known spaces aid in de-Westernizing the history of art. Unfortunately, the fire at Notre Dame and Al-Aqsa on Monday will not be the last time historic sites will experience significant destruction and I doubt anytime soon we will prevent companies, people, groups, and governments from destroying spaces as well. Digital modelling projects cannot resurrect these sites, but they do help lessen their loss.