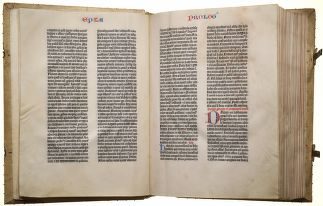 Of all the discipline-specific words co-opted by the larger public the word curate irks art historian me the most. Almost a decade ago, a certain popular social media platform set a new definition of it as picking things you liked and putting them all in one place to describe the mission of their website. “Carefully curated” experiences are now so ubiquitous that the term is losing its potency.

But for art historians the term curate is sacred. It represents one of our most essential occupations—caring for objects that we as a society have inherited. The problem with the popular notion of the term curate is that it ignores a primary part of its definition. A curator’s role is more than picking things they like or that go together and placing them in a single space (whether physical or digital), it’s the responsibility of preserving the world’s heritage.

Curation is in fashion in mass media, but also in digital scholarship. The term curation is commonly used to discuss data management.  However, counter to my desire to invoke Indiana Jones’ famed quip “that belongs in a museum” when it is abused in popular culture, I think that curation is a crucial mantra for digital scholars. The datasets, models, and other digital creations made through digital humanities research, at their best, store knowledge that current and future generations will benefit from.

In the past one hundred years new technologies have been introduced that have fundamentally transformed the cultural heritage landscape. An Apple II is arguably as culturally significant as a Gutenberg Bible . Consequently, both deserve our best preservation efforts. The data we create as digital scholars has value and should be treated with the same cultural preservation approach that curators have towards the Gutenberg bible. However, twentieth and twenty-first century technologies have presented new problems for curators. Whether plastic or digital, they require a different approach to preservation than canvas, stone, and paper. Standards and technologies that preserve these new materials are still in their nascence. (The New York Times recently published an article on the difficulty of conserving plastics.)

Scholars working in the digital humanities need to think about themselves as curators. In the process of creating a dataset, you collect, cull and manage, and, equally important, preserve. This is a difficult task since applications and digital tools rapidly degrade and become obsolete. Digital humanities tools have fads like mass media. Applications and programs that were popular even two years ago have faded as the funding dries out or a new tool makes the old one outdated. Consequently, a primary goal for digital scholars is to stabilize their data beyond the tools they are using, to treat the knowledge they are forming and collecting as future cultural heritage.

The maxim for all the digital scholars should be: my data belongs in a museum… or an archive, or a library.