Posted on February 28, 2018 by Jonathan Nyquist 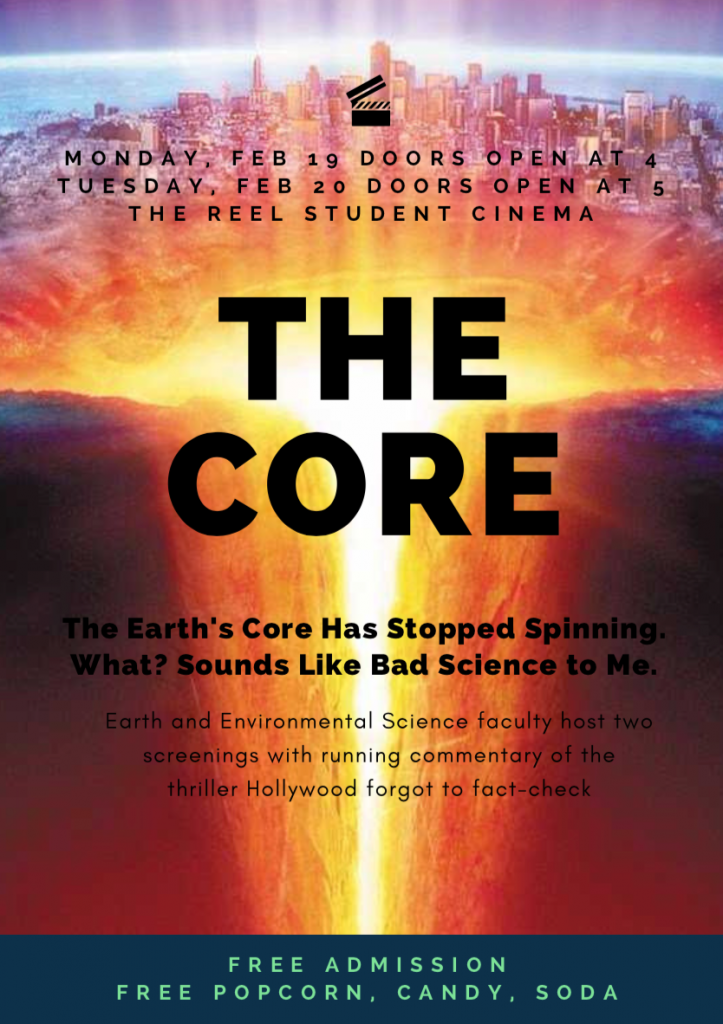 Before Temple created the current Gen Ed program, we had The Core, which was a set of distribution requirements for undergraduates taking electives outside their major. When the new GenEd was launched, I  designed and taught the class Disasters: Geology vs. Hollywood, where students learn about earthquakes, volcanoes and other geologic catastrophes while having fun critiquing the science in Hollywood disaster movies.

So it was doubly appropriate when GenEd, through the efforts of IH associate director Doug Greenfield, hosted two screenings of the disaster movie The Core at the Reel Cinema in Temple’s student union. For those not familiar with the movie’s premise, a U.S. military weapons program designed to induce targeted earthquakes has somehow stopped the spinning of our planet’s core, causing the collapse of the Earth’s magnetic field. Mayhem ensues, including super-storms that destroy the Roman Colosseum, microwave radiation  that melts the San Francisco Bay Bridge, and pigeons to run amok in Trafalgar Square. Our only hope? Jump-start the core by sending an intrepid band of “terranauts” armed with nuclear weapons to the center of the Earth.

An Earth and Environmental Science graduate student, Jim Berlund, and I provided snarky commentary throughout the film. Free candy and popcorn for all!

The latest research shows that

“…the strength of Earth’s magnetic field has been decreasing for the last 160 years at an alarming rate. This collapse is centered in a huge expanse of the Southern Hemisphere, extending from Zimbabwe to Chile, known as the South Atlantic Anomaly. The magnetic field strength is so weak there that it’s a hazard for satellites that orbit above the region – the field no longer protects them from radiation which interferes with satellite electronics.

And the field is continuing to grow weaker, potentially portending even more dramatic events, including a global reversal of the magnetic poles. Such a major change would affect our navigation systems, as well as the transmission of electricity. The spectacle of the northern lights might appear at different latitudes. And because more radiation would reach Earth’s surface under very low field strengths during a global reversal, it also might affect rates of cancer.”