In collaboration with researchers at Penn State, I been experimenting with using thermal imaging to detect preferential flow in the shallow subsurface.  The basic idea is to cut a trench upslope and infiltrate ice-water, then monitor the face of a second trench downslope to look for temperature changes.  Obviously, you do not need a thermal camera to see water emerge (left image) under dry conditions, but we hope to show the thermal approach will work when the ground is already near saturation from previous rains to see if the preferential flow changes with preexisting moisture levels. 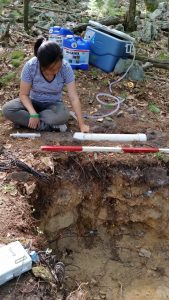 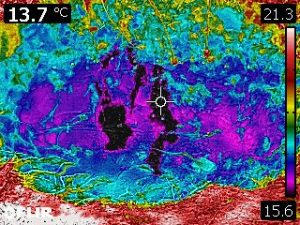