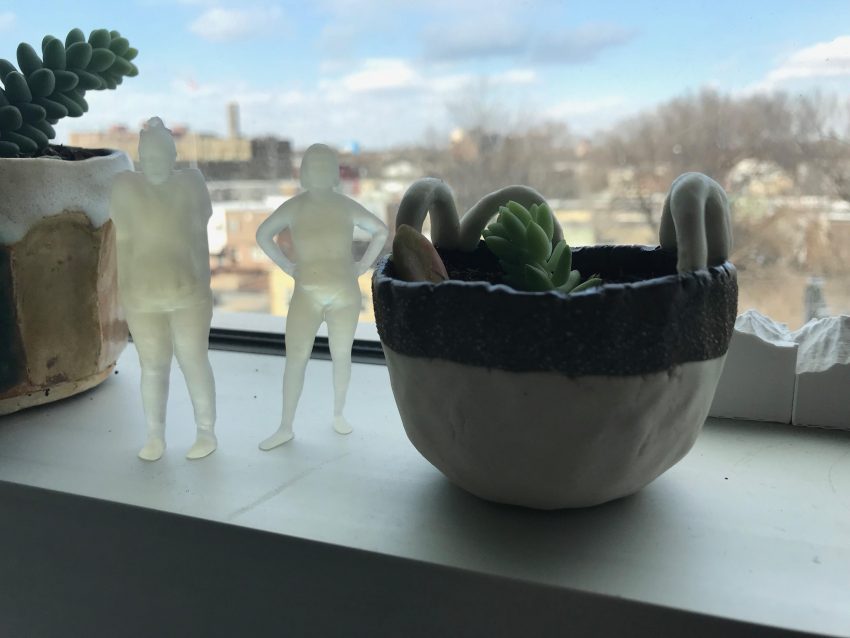 Last semester I looked at a lineage of women using their bodies in the land. I compared the way these women use their bodies, how their backgrounds and methodologies change the work, and how viewers can relate to them. How does blending in to one’s environment speak to the way we negotiate our identities in and through space? What is the relation between self and environment? How do technological extensions of the self enable and disable relationships with the environment? In this post I will trace my trajectory from studying these artists to my own experimentation with digital technology in an effort to answer these questions.

By looking back to ancient and aboriginal cultures, Ana Mendieta embraced a worldview that placed humanity not above, separate from, or in control of nature, but as a part of it. Mendieta’s exploration related directly to her own experience and to her overriding desire to ground herself in place, time, and history. 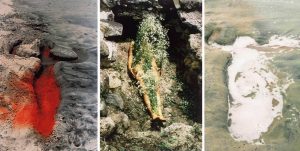 As she says, “I have been carrying on a dialogue between the landscape and the female body. I believe this to be a direct result of my having been torn away from my homeland during my adolescence. I am overwhelmed by the feeling of my having been cast out of the womb. My art is the way I reestablish the bonds that tie me to the universe.”

When Mendieta began her Silueta Series in the 1970s, she was one of many beginning to work in the emerging genres of land art, body art, and performance art. She combined the three in what she called earth-body sculptures. Her purpose and interest were rooted in nature’s symbolic meaning; Mendieta wanted to fuse with the land, not aggressively scar it. Mendieta often used her naked body to explore and connect with the Earth. She carved and shaped her own figure into the earth to leave haunting traces of her body made from grass, sand, dirt, flowers, tree branches, gunpowder and fire.

An interdisciplinary indigenous Canadian artist, Rebecca Belmore’s work focuses on issues of place and identity in the context of Indigenous people. Belmore’s work reminds us that the notion of intertwining self and world pre-dates the modern ecology movement. This idea has been central to Indigenous approaches to land for thousands of years. In the early 90s, Belmore created Ayum-ee-aawach Oomama-mowan: Speaking to Their Mother, a project in which she travelled across the country with an intricately crafted, giant megaphone and invited Indigenous participants to use the megaphone to speak to the land and acknowledge their relationship to it.

The megaphone operated as a performance, a sculptural object, and a functional tool, “reaffirming the historical stewardship of the land and underlining the power and importance of voice”. There is a reciprocity of self and site that honors rather than collapses cultural difference. In the case of this project, the intertwining of self and world has been done acoustically. Viewers are invited to listen to the land while also recalling that the land is an audience, one that is listening.

In my own work, I am thinking about care and how it connects my body to the land. I am being cared for by the land, how can I reciprocate that? The idea behind this project came from asking myself how I find “topographical intimacy: (a term coined by Lucy Lippard*). What does it mean to find intimacy within a landscape? How can I connect to the land? The mountains are a place with which I feel connected, grounded. This led me to considering a sort of self portrait within the land, an intimate embedding of myself within a topography. What would it be like if I could lie down amongst these bodies of land, like lying in tall grass but at a different and impossible scale? Is the topography of my body that different from the topography of these mountain bodies?

After spending the fall semester of my externship working on one large project in response to that research, I decided to spend the spring in a far more experimental stage, trying to learn and play on a few different tools in the DSC. I want to see what digital tools can be useful to me and dip my toes into a few more things! 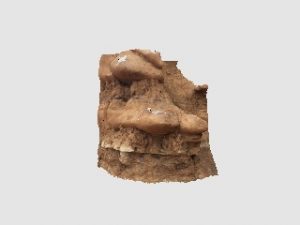 Maybe one of my favorite digital tools to use is the Structure 3D Scanner. I scanned myself and a friend, as well as some interesting landscapes in Utah.

I then used those 3D scans to do some more experimentation on the 3D printers – printing with resin for the first time as well as ceramic on the Form2. The DSC recently got a small CNC (Computer Numerical Control) router which I have been excited to try out. The best way I can describe its function is a drill bit attached to a computer. As a fiber artist, my inclination is to work with soft things. I wanted to see if I could cut models out of a soft foam to create some cushion/pillow/forms. My first problem was that the CNC does not cut soft things. But! If you freeze foam in water, it is then a solid. So now I am working on cutting some mountains out of soft foam. 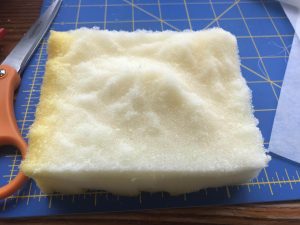 At this point I’m interested to see what the larger role of digital technology will have in my work and how it intersects with the traditional craft processes I’m more accustomed to using. The artists I’ve been looking at are directly engaging with the land and here I am sitting in the basement of a university library in the middle of a city.

I am hoping that using technology will help me to get at this compulsion to connect my body to the land, to satisfy the urge to leave a trace of myself in the landscape. While I live in Philadelphia, there is something that makes the mountains more accessible via digital tools. I can access these spaces that would otherwise be challenging for me to get at, and explore my interaction with these land bodies at a scale this not possible in the real world.

*Lippard, Lucy R. The Lure of the Local: Senses of Place in a Multicentered Society. New York: New Press, 1997.