My digital project’s research question explores how the built environment affects people’s health, especially in terms of weight, in the state of Pennsylvania. In order to consistently measure the built environment’s effects, I’ve previously worked to download satellite images from Google’s static. My first blog introduced how to use python and Google static map API to downloaded all the tile images. I  put the image together based on census tract, import all these images, and convert each image into a 3-dimensional array in python.

The next step is to use a pre-trained Convolutional Neural Network (CNN) model to extract features of the built environment from satellite maps. To run a deep convolutional network for object recognition, I’m using a model trained over ImageNet’s dataset developed by Oxford’s renowned Visual Geometry Group (VGG). My previous blog  “Measuring the Impact of Built Environments on Health Part II: Use of transfer learning” discussed why and how I use the VGG  model as the pre-trained model to extract the features of the built environment. In this blog, I will focus on how to use Python to apply the VGG16 model to do transfer learning.

Set up a model

Keras provides both the 16-layer and 19-layer version via the VGG16 and VGG19 classes. My study uses the VGG16 model. VGG16 is trained over ImageNet, and the images in ImageNet are classified into animals, geological formation, natural objects, and many other different categories. The input images I am using are Google’s satellite images, including images of parks, highways, green streets, crosswalks, and housing.   Since there are some differences between the input data image in the pre-trained model and the input image data, I will use the second fully connected layer instead of the final layer-predictions.

The model can be created as follows:

My project uses a second fully connected layer of the VGG-CNN-F network to extract the information of the built environment. If you want to check what kind of exact objects exist in the image, you should use prediction as to the extracting layer.  The following code shows how I use the second fully connected layer ‘fc2’ to extract the information from each image.

Extract the feature of the maps 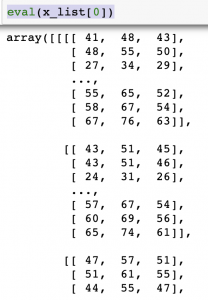 The following code shows how to implement the VGG pre-trained model to extract the features of the built environment in each census tract.

Finally, I can get 4096 variables for each census tract in data_sum. The following table is part of the output of data_sum.