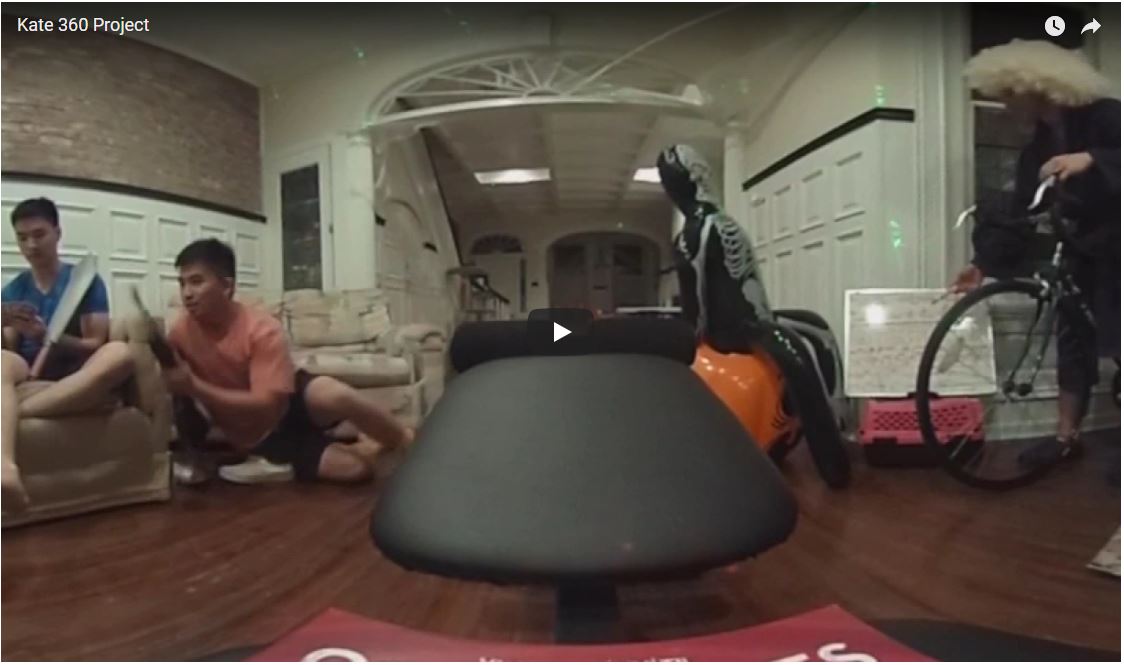 The One-Shot-Wonder Assignment, which I began writing about here, invited my Fall 2016 Emergent Media students to begin exploring 360° video production. We minimized the technological learning curve and emphasized aesthetic exploration. The class used point-and-shoot 360° cameras that required no stitching or postproduction, and created a series of one-take movies designed to answer this fundamental, open-ended question:

What works well in 360° video production?

Because there were technical guidelines but no specific aesthetic requirements, students worked in a wide variety of production modes and styles. Reflecting on their work, it seems that mode and genre are relevant, but perhaps not as important as the way each project engages physical space.

Two of the most successful videos from Fall of 2016 were the mannequin challenge video by Kate Morrison (above) and the driving video by Zach Schwartz (here). They are effective in part because their strategies provide solutions for two potential “problems” in 360° video: The fear of missing something and the frustration of not being able to physically move around.

The mannequin challenge video takes a “visual wonderland” approach: There is something delightful no matter where you look, including up and down. This also means that there is no wrong way to look. Of course, this doesn’t change the fact that it is physically impossible for humans to see all angles of view simultaneously. We may always wonder if we are “missing something,” because – inevitably – we are. (We don’t have eyes in the back of our heads!) In this video, however, compelling visuals entertain in all directions, and this reassures us: Although we can’t see it all, each angle of view is equally delightful. There is no wrong way to experience this video.

Another potential constraint of 360° video is the way it allows a viewer to look in all directions but to move forward in none. Ironically, this expanded ability to view (compared with traditional video) sometimes leaves viewers feeling stuck and unable to move. As discussed earlier, the smooth driving of motion reduces this frustration. But it is not just the motion that makes this video work — it is also the convention of driving. An audience would not want to jump out of a moving car, nor would they expect to be able to. The creator of this video was inspired by 360° action sports videos – skiing, skateboarding and zip-lining. These videos also work for the same reason as the driving video: Being a “passenger” in a moving experience gives the viewer both a smooth sense of motion and a reason to want to stay sitting.

What works well in 360° video:
Observing (and critiquing) public space

Guided by questions of surveillance and urban space, one student filmed an observational documentary at a particular urban intersection. He stumbled upon a poetic visual metaphor: A highway bridge blocked access to the sky. The contrast between the capabilities afforded by the technology (access to view in all directions…) and the limitations of space (… but yet all you can see is the bottom of a bridge?!) resulted in a meaningful visual metaphor.

A message emerges: Just because we can see all angles doesn’t mean we can access the sky.

Two International students from China filmed themselves sitting at an outdoor coffee shop discussing “Black Friday,” the American consumer event the day after Thanksgiving. On the other side of a large courtyard, an extremely long line of American consumers waited for a store to open. From the perspective of the Chinese students in the foreground, the line of consumers seemed absurd. Again, public space – as well as the omnidirectional view of the camera – is critiqued.

A message emerges: Just because we can see something, doesn’t mean we necessarily understand it.

Results that lead to more questions: Does narrative work in 360°?

Which genres and modes work for 360° storytelling? How are cinematic conventions reinvented? Will traditional narrative strategies work within a 360° view?

While traditional narrative films use specific conventions of cinematic composition and postproduction strategy to guide audience attention, the 360° view removes the ability to precisely “frame” shots in traditional ways. It also changes the role of editing. What does “framing” mean in a 360° sphere? What does “editing” mean for 360° video? Only one student filmed a narrative project for his One-Shot Wonder 360° project. He relied on two key strategies to guide attention: Direct address (speaking directly to the camera/audience) and intentional eye movement (using actor gaze to direct the audience’s gaze).

The 2017 students pick up where the 2016 students left off, and further explore spatial storytelling and narrative conventions in 360° video.

Please join us on Thursday to see the results of our 2017 explorations!

The Fall 2017 projects are made possible with the generous support of the Innovative Teaching with Makerspace Technology grant, awarded by the Digital Scholarhip Center and Center for the Advancement of Teaching. Please come join us to celebrate what this grant helped us to accomplish! (Spoiler alert: Editing is allowed this semester, so look forward to multiple locations, scene transitions and text titles!)

Laura Zaylea teaches traditional and emergent media production in the Department of Media Studies and Production, Klein College of Media and Communication, Temple University. Upcoming 360° courses include Dublin 360: International Urban Storytelling (Summer, 2018; more information here ) and Emergent Media Production (Fall, 2018). More about her teaching and creative work can be found at www.LauraZaylea.com, and you can reach her any time at Laura.Zaylea@Temple.edu.