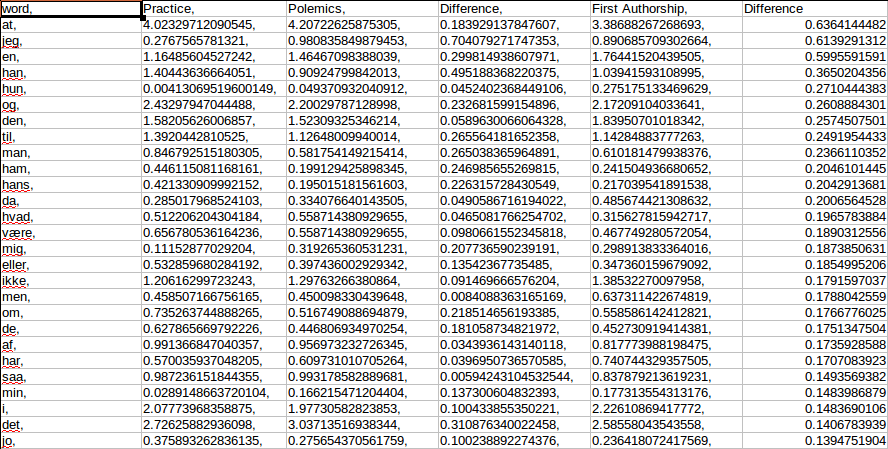 One of the disadvantages of the stylo() package for R is that its word frequencies do not come out in CSV file format. However, it does create a very neat list of the words it uses to differentiate between pieces of literature. As such, I wrote an R program that used that list to determine the similarities between what I called the “first authorship” and “polemics” sections of Kierkegaards writings. A part of the list that was produced is above. It calculated this values for 5,000 words, and most of them did not play a major role in the calculation, but these show the values that contributed the most to Practice in Christianity being in the polemics section rather than the first authorship section.

What you can see looking at this is that the word “at” plays a major role — the frequency of it in Practice is more similar to its frequency in the polemics than in the first authorship. However “at” is a difficult word to look at and immediately analyze. It means “to” as in the infinitive formation of words (i.e., “to see”). Further, it can have the meaning “that” or “that is to say,” according to an 1845 Danish-English Dictionary. It is very frequent in both the first authorship and the polemics — and it is in fact the most frequent word in Kierkegaard’s corpus. So why was it so prevalent in Kierkegaard’s polemical writings as compared with the first authorship? At present, I lack a theory for this, but I have been trying to figure it out.

As far as the content of the book goes, there is at least some reason to say why Practice would be marked a “polemical” work. It is split into three parts, but it is the third (and largest) where the polemical nature of the work comes out. The figure of Anti-Climacus is writing against the idea that the entirety of Denmark is Christian, because, according to him, the role of the Christian in the world is to suffer. In making it so that everyone is Christian but that no one should say it out loud, the people of Denmark avoid pursuing the possibility of suffering.

I should note here that Kierkegaard’s idea of Christianity could at times be very, very dark.

So in the third part of Practice, we see Kierkegaard’s pseudonym Anti-Climacus attacking Christianity in Denmark in no uncertain terms. Christendom gets in the way of Christianity on his account, and this is the main theme of the polemics as well. The difficult in this interpretation, however, is the fact that, at least according to The Point of View (Kierkegaard’s self-reflective work), this was the point of all of Kierkegaard’s writings. So my work trying to figure out the reasons for this continues.