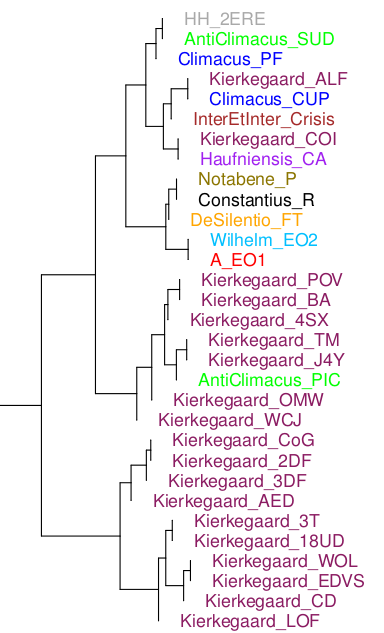 Søren Kierkegaard was, to say the least, an enigmatic author. He deliberately obfuscated his work by using what he called his “pseudonyms.” However, unlike many pseudonyms, his were different characters, different authors with their own personalities and backgrounds. From “A,” the hedonistic aesthete, to his counterpart, “Judge Wilhelm,” the traditional ethical thinker, to “H.H.” and “Anti-Climacus,” the expounders of Christianity.

Due to the fact that Kierkegaard communicated via these pseudonyms and by writings under his own name, it is difficult to determine what Kierkegaard believed in what he wrote. He explicitly denied the writings of the pseudonymous authors as accurate representations of himself and his own views. In fact, Kierkegaard and the pseudonyms would refer to each other in the third person.

So one of the open interpretive questions in Kierkegaard scholarship is, “Which pseudonyms most accurately represent Kierkegaard’s own views?” A number of different methods for answering this question have been used, including reference to Kierkegaard’s journals. However, not much work has been done on addressing this question since the work of Alastair McKinnon in the 1970s. McKinnon’s work was partially concerned with determining which pseudonym most closely resembled the voice of the writings in Kierkegaard’s name. However, this issue is complicated by the fact that Kierkegaard’s authorship is split into several distinct sections.

Kierkegaard had three main sections to his work: one are his religious writings, meant for instruction (or “upbuilding”), which are all written in a similar style. Then there are his late writings, which are polemical in character. He attacked the Church of Denmark and the concept of “Christendom” as violating the essence of Christianity. Finally, there was what is called the “first authorship,” a project containing most of the pseudonyms, which was designed to lead people to examine their priorities more deeply (and to show them how far away from “Christianity” they were).

As such, Kierkegaard’s writing style was different across his corpus. Therefore, I am presently looking to see how various pseudonymous works correspond to the writings in his own name. The later pseudonyms (such as H.H. and Anti-Climacus), were engaged in both polemics and edification. The image above is a cluster analysis – grouping together texts by stylistic similarities. The first group is the first authorship, the second is the polemical writings, and the last are the “upbuilding” writings. What is particularly interesting is the split of the writings of Anti-Climacus (in lime green). AntiClimacus_SUD (Sickness Unto Death) is lumped in with the first authorship, while AntiClimacus_PIC (Practice in Christianity) is lumped in with the polemical writings. As such, my current research project is attempting to see what differences this analysis is picking up on.