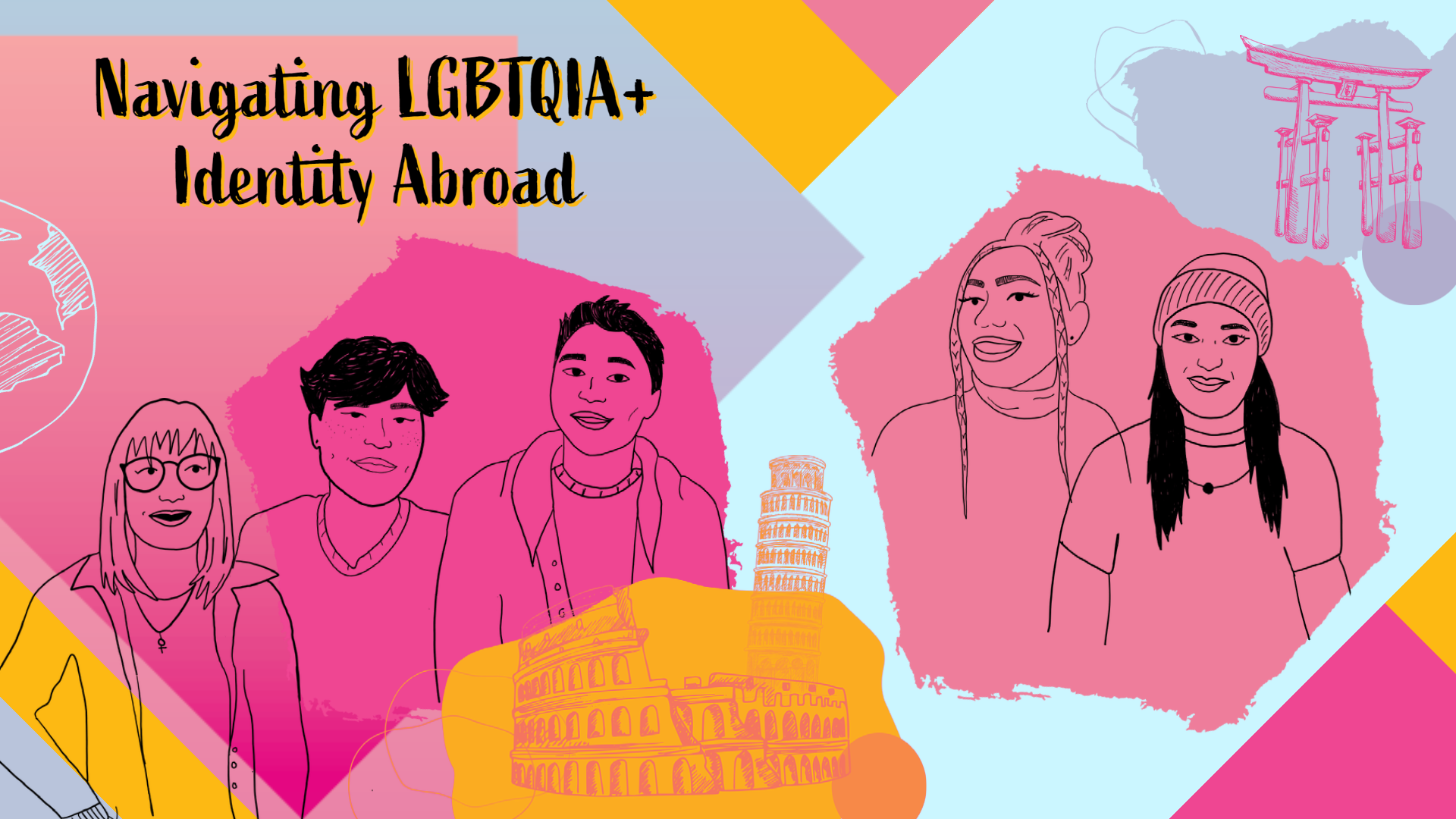 What is it like to live and study abroad as a member of the LGBTQIA+ community? During Study Abroad Week 2021, five Temple students came together to explore sexuality, gender, race and intersectionality in a global context.  Jennifer Pollitt, assistant professor of Gender, Sexuality and Women’s Studies, moderated the discussion in which the student panelists shared their journeys of self-discovery abroad.

How big a factor was your identity as an LGBTQIA+ individual when you chose your program/destination?

Emma Kerwin (she/they), TYL ‘22 (Temple University, Japan Campus)
I definitely wasn’t picking the city based on how I knew I would be received, but I’m used to not talking about my identity, either for safety purposes, or to make things easier on the people around me. When I got to Tokyo, there were a lot of people who were very accepting, but they were all American students, so I still kept my identity to myself, for the most part.

Amir Methvin (she/her), CLA ‘23 (International student from South Africa; Temple University, Philadelphia)
As someone who walks through the world with albinism and also within a Black female context, it was an important decision choosing to go to a school that is diverse. African communities and immigrant communities have settled in Philly, and Temple holds that identity for me, so when I came out, it turned into more and more of an important factor to be at Temple.

Liam Smith (he/him), CLA ‘22 (Latin American Studies Semester, Quito, Ecuador and Temple in Oviedo, Spain)
I have the privilege of not being questioned about my identity a lot, so I was prepared to not talk about it while in Ecuador because of what I learned from studying Latin American culture. When I went to Spain, however, I had a different perspective and was able to engage in those conversations a little bit more.

Chiara Vea (she/her), CLA ‘22 (Temple University Rome)
I have been living with my identity for a long time, so I was prepared to continue business as usual and not talk about it with my peers, but when I realized there were many other students on the program who identified as LGBTQIA+ and were open and unapologetic, I knew they would respect me. It was really nice to get a feeling of what it could be like to be completely out, so studying abroad was a big moment for me in more ways than I realized.

MG Ling (she/her), CPH ‘22 (National Taiwan University, Taipei, Taiwan)
I wanted to strengthen my Chinese language skills, so I decided to study abroad in Taiwan. I wasn’t really thinking about the identity aspect of it, but what was great is that same-sex marriages are legal in Taiwan, so I felt I would be accepted. Although I didn’t come out, if there were ever discussions with other students about identity, I felt comfortable enough to talk about it with them.

What resources did you use to help you navigate your identity abroad?

Emma Kerwin
I reached out to Temple Japan Study Abroad Ambassadors and other program alumni with profiles on the Education Abroad website to ask about their experiences.

Liam Smith
YouTube was a huge resource for me–to see bloggers who identify as LGBTQIA+ navigating their normal lives abroad and sharing their experiences with the world was extremely helpful.

Amir Methvin
Gender, Sexuality, and Women’s Studies at Temple has been a great resource for me because I am able to be immersed in the LGBTQIA+ community. At a certain point you realize we’re all saying the same things, so it’s a lovely feeling to share experiences with peers and feel supported.

How did you navigate your intersecting identities while studying abroad?

Emma Kerwin
For some Japanese students, they had never heard of lesbian or gender non-conforming, and it’s not always fun to explain yourself, especially when you struggle with your own identity or the journey that you have taken to come to terms with it. Sometimes, I don’t even have the answers when explaining my identity to someone. Generally, people received my explanations well, but it can be difficult to put your identity into words for those who have never been exposed to them before.

Amir Methvin
I am in a constant cycle of navigating my intersecting identities. I surround myself with the second-generation African community at Temple as captain of Temple’s only African dance team. Western African communities are often labeled with or associated with homophobia and that can be passed down generationally, so I sometimes find myself on the outside of my community.

Chiara Vea
Rome is very Catholic, so at first I was concerned I would have to hide my identity. As I got more comfortable with my peers and began going out more, I was able to live openly and exist without fear of judgment.

How did your study abroad experience affect your identity or your understanding of identity within a global context?

Amir Methvin
America’s affinity for gendering and labeling has affected my and my partner’s views of LGBTQIA+ communities. Coming from South Africa and Jamaica, respectfully, we were not prepared to categorize ourselves within lesbianism in a way that did not previously exist in our contexts. Now in my interactions with other queer people in Philadelphia, I ask myself and others what it means to be queer in their current context.

Liam Smith
I was lucky enough to become friends with a lot of people my age in Oviedo, so being labeled was not much of a concern and people just accepted you for you. Suddenly, that weight wasn’t there.

Emma Kerwin
As a masculine-presenting lesbian with tattoos, I was concerned what local Japanese people would think of me. I realized, though, that they were more focused on my identity as a foreigner and not [on] how I presented. In a country like Japan, it was refreshing to be around people who were not thinking about queerness from a political standpoint.

Did aspects of your identity play a role in determining your housing abroad?

Liam Smith
Homestays were required on both of my programs, but I was scared to be implemented into a family dynamic outside of my own. I hoped that I would be able to share my experiences and life with them, but I didn’t know if I would be able to. In the end, I was.

MG Ling
At the time, I had long, more feminine hair, so I did not have many fears since I knew my identity would not be questioned. My housing was gendered, so I lived in a single room in a building with all women, but if I went there now with my shorter hair, I would be concerned about getting looks from the other people in my building.

Chiara Vea
I lived in the university-organized housing at Temple Rome with three randomly chosen roommates. Whenever I live with new people I have that voice in the back of my head that’s concerned my presence may make them uncomfortable. I was fortunate to have another open and proud bisexual roommate and I followed her example, and together we explored Rome’s LGBTQIA+ community.

Any final advice for students who are considering studying abroad?

Emma Kerwin
From a mental health standpoint as a queer person, it was really refreshing to get out of my bubble during the pandemic. It was the most alive that I have ever felt. I think you can grow a lot as a person and as a queer individual by studying abroad.

Chiara Vea
Talk to peers who have already studied abroad who may have insight into the LGBTQIA+ experience or who know about safe, queer spaces in your host city.

Liam Smith
The United States has a lot of tension and turmoil, especially regarding LGBTQIA+ identities, so I think it’s interesting to step outside that bubble and experience your identity in another country and environment. In turn, you will be able to look at the U.S. from a different lens.

MG Ling
There can be a lot of fear associated with studying abroad and traveling to a country without knowing how you are going to be perceived, but it builds confidence. I went in hesitant about being open, but when I came back to the United States, I realized I had become more comfortable with myself.

Story compiled by Evan Bossio, Coordinator, Education Abroad
Watch a recording of the conversation on YouTube