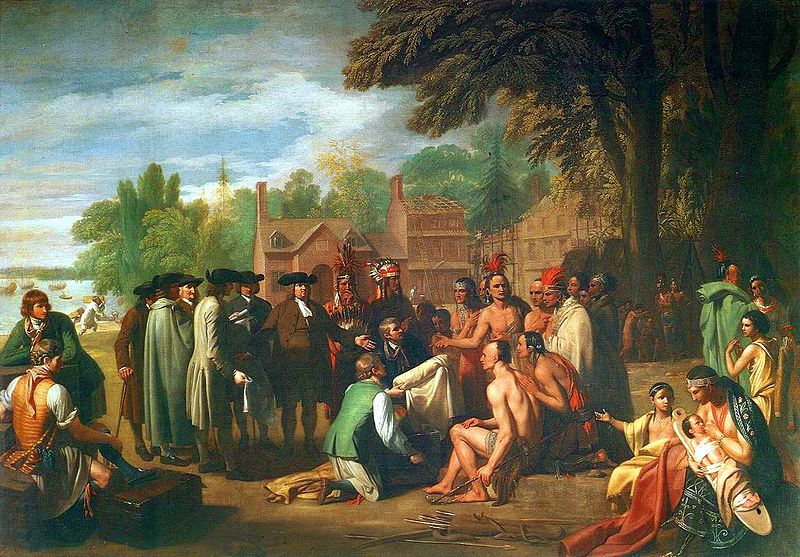 In this blog post, I will detail my digital project to create a historic GIS landscape map focusing on the expansion of British and later American settlements (1680-1900’s) across the colonial landscape of Pennsylvania. Using the digital mapping tool, QGIS, I created a map of Pennsylvania cities, towns and incorporated boroughs under a pointillist approach. The goal was to represent Pennsylvania’s settlement expansion in relation to native historic markers and land purchases, serving as an educational tool for Pennsylvania’s colonial history and help educate others about native lands and rights.

Much of early Pennsylvania history, namely that of William Penn and his sons, is taught as a peaceful acquisition of land and expansion with the colonial government negotiating with local nations such as the Lenni Lenape, now Delaware, for settlement rights. However, this history ignores and sometimes outright removes a more painful narrative of native nations forced from their lands by purchases they did not necessarily agree to and settlement expansion following violence against already set native settlements. This project attempts to shed some light onto that history not through discussing or dismissing that history, but by representing the expansion of settlements across the Pennsylvania landscape and the purchases that were made with many nations.

Started in August 2020 with graduate students Tauheedah Asad (MMC), Joe Makuc (History) and Stanley Schwartz (History), we began collecting data for each individual incorporated town, borough, and city in Pennsylvania. Specifically we looked for the settlements settled by date, incorporation date, and earliest known date plus the latitude and longitude for their placement on the map. We also included sections for Tract number should one be available, the date the first plot of land was Warranted to settlers, and dissolution dates should a settlement cease to be or split into multiple settlements. Finally, Notes and Citation columns were added for academic research purposes.

In collecting this data we poured over county and local histories written both by historians and primary documents detailing land sales. Online maps provided by the Pennsylvania State Historic Museum Commission and the Philadelphia Library helped tremendously in finding dates of purchase. Latitude and Longitudinal points were mostly placed at areas of historic significance or current governmental buildings to signify where the town center likely would be.  For example, the site of Penn’s (actual) Landing was chosen for the city of Chester, Pennsylvania in Delaware County rather than their current government buildings due to its historical significance.

We chose a pointillist expression, representing our data as singular points across a larger landscape, over bordered-territory perspective as the landscape would have changed many times since colonization and would not be able to represent native settlement in an area realistically. We also worried a bordered perspective would reinforce the settlements as static entities that just existed and controlled the land, rather than each settlement having its own history of settlement and expansion.

In December 2020, I took over the project in full and began contacting and working with the Delaware Nation to better represent native interests in the project at large. They asked for the incorporation of a purchases layer to represent the extent of settlements expanding prior to any land agreement which would further show Pennsylvania’s expansionist policies during the colonial era. These purchases of land were undertaken by Pennsylvania from initial settlement (1682) until a final purchase in 1792, involving many native nations in these actions. However, these purchases were rarely fair or followed in truth, with settlements appearing prior to the purchase and native groups still being forced off the land despite protections in the purchase treaties.

Furthermore, the map was removed of many native settlement representations, with our project now turning more towards settler expansion over the landscape than as a representational piece of prior native settlement in Pennsylvania. This site removal was intended to allow the many native nations that have historic homelands in modern-day Pennsylvania the authority to designate and represent their own sites on the map, rather than having them represented by the same data info as each of the colonial settlements.

While the map started as us trying to refocus Pennsylvania’s early colonial narrative towards the native nations existing prior to colonization, the project became one of representing that colonial settlement over the landscape. This change did not remove the initial goal of representing the expansion and the ways it took place, however, with each data point still trying to tell a story of Pennsylvania expansion across the modern state. Many points contain short histories about how that expansion was undertaken, with most explaining the native settlement that existed there or nearby prior to colonization. The land purchase map also furthers a landscape expansion, as many settlements were founded prior to the land even being ‘purchased’ by Pennsylvania proper.

Even without the desired interactive component the map still says much about how misleading the current narrative is. Many settlement dates appear before any land was even ‘purchased’ by colonial governments and warrant dates show the land being sold before nearby land was even settled. The expansion also shows how Western Pennsylvania was settled earlier than most assume, with many settlements existing as fort towns initially. It shows that Pennsylvania, while representing a history of peaceful purchase expansion, still desired expansion into settled lands and did so without care for the people who lived there previously.

Currently the map has over 3000 data points of almost every town/city/borough in Pennsylvania with each point having at least a settlement date, incorporation date, latitude and longitude. The next step would be an incorporation of native-created data or data created under their auspices to reintegrate the native settlement focus, and the expansion to a fully interactive map. This interactive version would be publicly available and allow for in depth interaction with each data point given, detailing a history of the settlement and its creation. This will likely be conducted through ArcGIS Story Maps, though it is still undecided at this time. An expansion into bordering states could be done as well. For my own purposes I plan to use the map in my larger dissertation, tracking settlement patterns alongside historically noted trade routes and material connections between settlement collections.

Thank you to Marcus Bingenheimer, the Scholars Studio as a whole, and the Delaware Nations for assistance in this project.

Richter, Daniel K. (1992) The Ordeal of the Longhouse: The Peoples of the Iroquois League in the Era of European Colonization. Chapel Hill: The University of North Carolina Press.