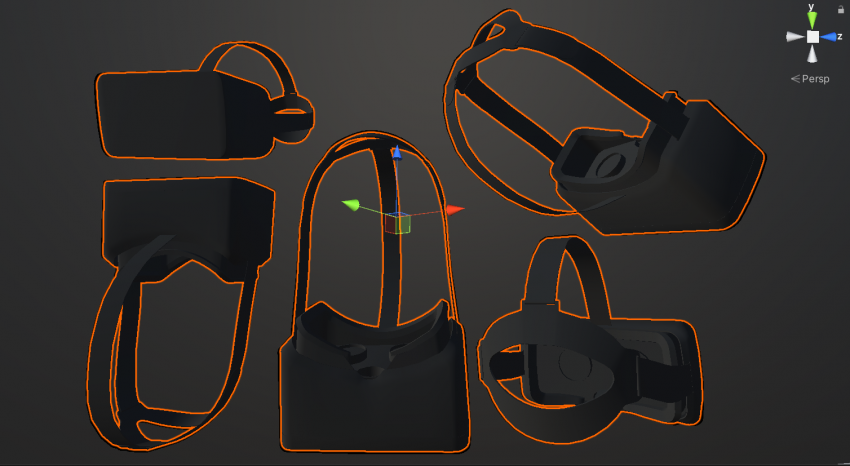 As the availability of Virtual Reality technologies continues to rise, VR research (i.e. research in and about virtual reality) is becoming more widespread, especially in psychological research. For my Scholars Studio graduate fellowship project, I am designing VEs (virtual environments) which will:

Overall, VR provides many benefits for researchers, such as replicable testing conditions, safe exposure or treatment, and precise measures and observations (Davis, 2009). At the same time, VR is also a popular object of scholarship itself, not just a methodological tool. There are many phenomena, such as presence or immersion, that have become conceptualized in relation to the development of VR technologies. But, there are different types of VR research and various ways to categorize it.

In an attempt to categorize different types of VR research, I decided to look at the role which VR plays in the research process, and if VR is per se an object of study or if it just serves a functional purpose. To be clear, a single study can occupy multiple intersections within these categories.

So, in terms of the purpose of VR in research, there are studies that can only be done in or with VR, while others can be technically done without it, i.e. VR functions as an alternative to the primary object of research. At another dimension, there are studies that use VR or VE as a space to conduct research. Therefore, there are at least two types of VR spaces that I call manipulated and controlled environments.

VR as a manipulated environment is a simulation space that relies on the technological affordances of VEs to manipulate its features. This type of VR research includes manipulations that are only possible in virtual circumstances. For instance, there is a project that tests the accuracy of scaling objects in VR by manipulating the display medium, and the context of the environment (see Figure 1.).

Figure 1. Image is taken from http://ethanarnowitz.com/html/projects/project_Rhodes.html 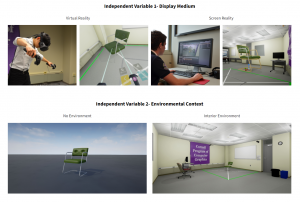 VR as a controlled environment represents a wide range of studies that prefer or often require VR instead of real-life circumstances. In medicine, practitioners often choose to train health-care workers and scientists choose to do research in VR because it eliminates the risks of hurting patients. For instance, Smith-Coggins et al. (2006) tested the impact of napping on the workers’ performance in the VR catheter insertion simulator.

As an element of research design, VR also can be the treatment, but it may be different when VR functions just as a separate condition versus when the stimulus is the feature of the VR.

VR as a condition is the area of VR research that treats VR as a possible condition to test the effects of VR per se (not its features) compared to some other technology or real-life circumstances. In terms of learning, using interactive environments can be useful if the information/content is designed to be assessed this way, as in the study (Sakowitz et al. 2019) which found no effect on learning of HMD-based VR compared to more traditional 2D materials used by dental students. Luckily, VR is more efficient for therapy purposes, and specifically for pain management (Carrougher et al. 2009) which was found as effective as the usual treatment. Burn patients were exposed to the SnowWorld VR app developed by the University of Washington.

VR (feature) as the stimulus represents probably the most popular area of VR research (especially in social sciences) that refers to the effect studies, i.e. when some feature of the VR is tested to have an effect on individuals’ state, behavior or attitude. Those effects are inherent to the qualities/features of the VR environment and cannot be compared to real-life circumstances.

Scholars often test the differences between ‘immersive’ and non-/low immersive VR, which basically means that they either use the HDM (headset) to access VE or not. But, a) using HMD does not make any VE inevitably ‘immersive’, i.e. immersion is a psychological state, not a technological feature, and b) even though HDM helps to maintain focus into VE, which might be important for presence, VR may produce engaging experiences but it is not what is always important. For instance, in the study conducted by Makransky, Terkildsen and Mayer (2019), using a headset in their learning environment caused more presence but less learning.

My Research Project using Virtual Reality as the Stimulus

As an example of VR serving as a stimulus, for my digital research project, I am developing a preamble of the VR studio at the Scholars Studio. A preamble is a virtual replica of the immediate external environment used for a smoother transition into the virtual environment (Smolentsev, Cornick, & Blascovich, 2017). I am also planning on manipulating the level of its detailness in future study. You can see its current stage below from screenshots compared to the photos of the VR lab. I will discuss how I developed it in my next blog. 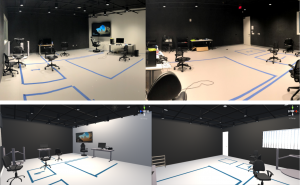 Finally, VE may function as a measurement of some variable which in my case is the sense of presence. Thus, I also use VR as a measurement tool using its behavioral affordances in order to stimulate reaction to the environment which allows me to test some individual or contextual factors of presence. As a big part of my project in the Scholars Studio, I am trying to develop a more reliable VE (i.e. measure) similar to the one I made before.

Previously, as seen on a screenshot above, I designed a simple Unity3D scene with moving up and down segments of the ceiling. Participants were placed under the last (third) segment, and we afforded to react to it via squatting or ducking, i.e. vertical postural change. The depth of the reaction represented the sense of (physical) presence, or the perceptual illusion of non-mediation (Lombard & Ditton, 1997). In other words, the more it felt that the simulation was not simulated (due to the study’s treatment), the more intense the reaction was. This is how VR (or rather VE) functions as a behavioral measure in this case.

In my current project, I am trying to avoid methodological challenges that I encountered previously and as well to create a product that could have been used by other researchers or VR practitioners. I work in cooperation with Temple’s MAP lab to validate the future measure. In a future blog, I will talk about how and why I am developing these specific virtual environments, and what it will result in.