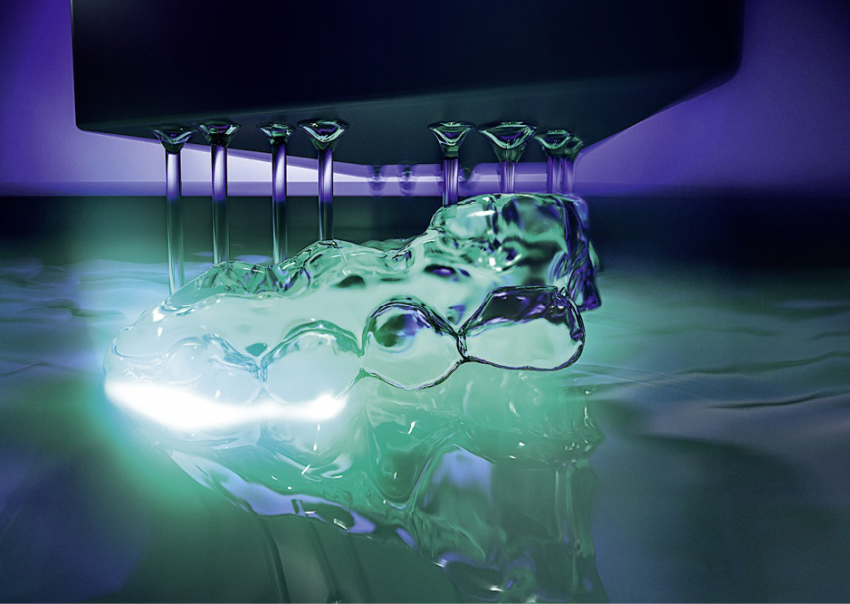 3D printing has revolutionized the world. Companies, researchers, and hobbyists find new ways to incorporate this technology into their creations every day. As this technology evolves, many are working towards making 3D printers faster and versatile. Those who can meet this challenge will help to usher in an era in which 3D objects and parts can be created in a matter of minutes at the push of a button.

My research at the Loretta C. Duckworth Scholars Studio (LCDSS) will help further light-based 3D printing’s abilities by combining digital light projection (DLP) systems with more intuitive methods of motions. The efforts put forth by myself and the surrounding scientific community will allow objects to be created in a fraction of the time compared to traditional light-based 3D printing methods.

In the early 1980s, Charles Hull developed a novel additive manufacturing (3D printing) process which revolutionized manufacturing and research. This process has since evolved from industry practices to open-source applications that have provided access to inexpensive, desktop 3D printers giving engineers, scientists, and hobbyists a chance to make unparalleled innovation.

Multiple additive manufacturing methods exist, including three of the most common; fused deposition modeling (FDM), stereolithography, and digital light projection (DLP). Each method has advantages and disadvantages; however, DLP technology is currently being underutilized. All commercially available DLP 3D printers project a 2D image on the top surface of a vat filled with a photo cross-linkable resin.

Although this method is revolutionary, there are limitations such as;

I’ve been fascinated by 3D printing since 2013 when a good friend convinced me to buy a 3D printer. Ever since I’ve spent most of my time learning and teaching current and new 3D printing methods. During this time, I’ve seen many limitations of 3D printing technology. Still, the primary hurdle that always stuck out was the amount of time it took to make an object. Small objects are usually not much of a problem if it is simple in shape. However, the greater an object’s size or complexity, the longer it will take to print. For reference, if I were to print a model of my hand that was true to size, I would have to begin the print and come back the next day.

Therefore, I have always kept an eye out for new 3D printing methods that would provide faster results. An approach that has been pioneered by Kelly et al., has demonstrated a novel way of DLP additive manufacturing to fabricate 3D objects within seconds or minutes instead of hours without using support material.

Their research uses a volumetric approach to additive manufacturing in which light from the projector illuminates a rotating vat filled with UV-sensitive resin. Light is projected in a series of 2D images as the vat is rotated 360°, forming a 3D object in the center. This approach will drastically improve the current limitations mentioned before. However, their research presents new limitations that will need to be addressed for future applications.

If you’ve watched the video, I think you’ll agree that this is a fantastic technology! But what if you could design a system that leaves the resin material completely motionless? Could such a system reduce the amount of vibration and rotational inertia experienced by the object inside? What if it were possible to exchange resin materials in between printing light cycles? Could this provide a multi-material object? These are all questions that I believe I can answer!

Working with the LCDSS has provided the opportunity to pursue a project that will one day be able to use DLP technology to expand upon the work done by Kelly et al1. The scope of my project consists of designing an augmented motion system for a volumetric DLP 3D printer. This work could eventually allow for increased printing speed and object resolution and exchange of resin material. 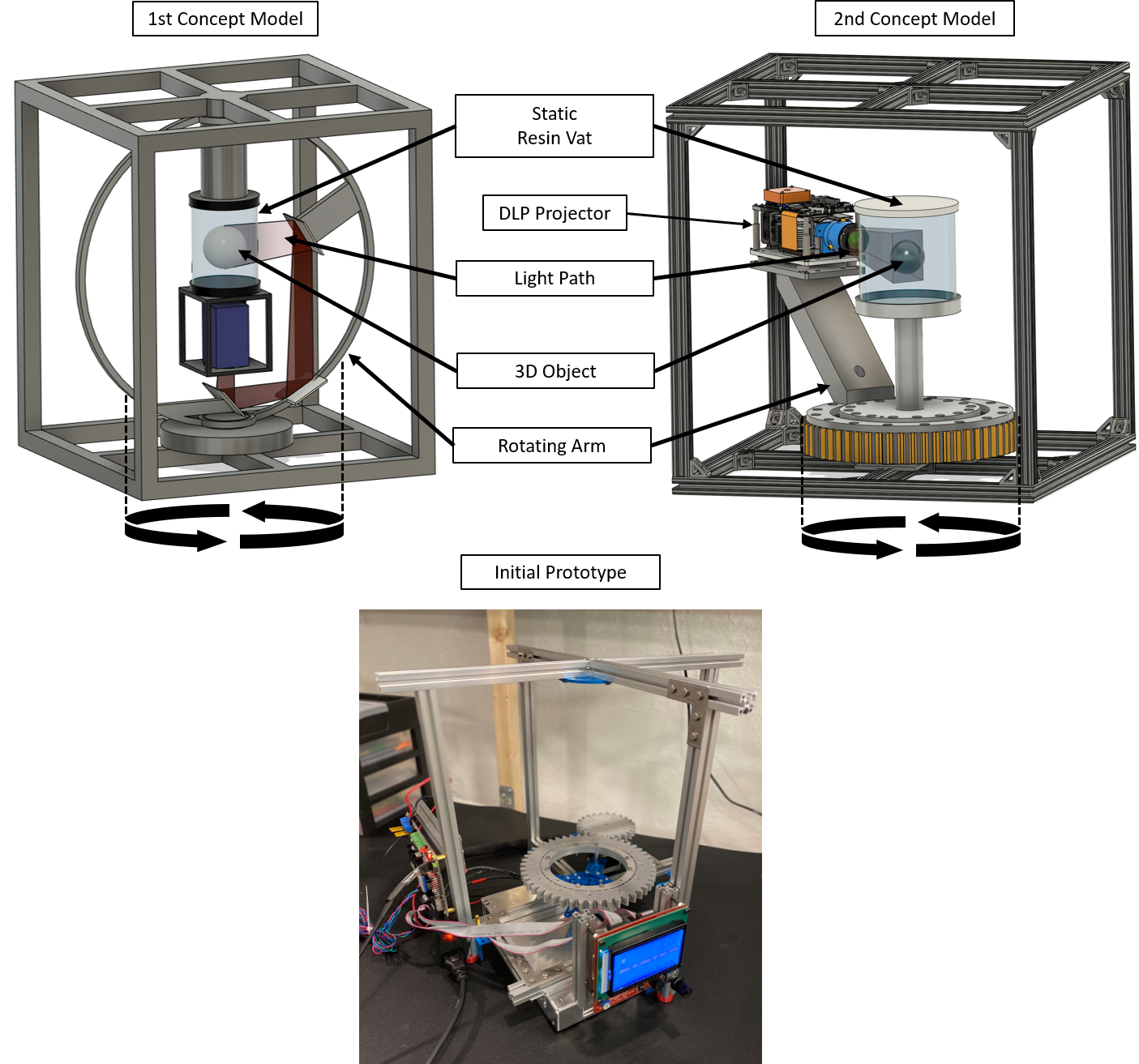 I hypothesize that it may be possible to reduce torsional stress (stress causes by rotation) and vibration experienced by the resin by developing a system in which a DLP projector revolves around a static resin vat. This could, in turn, increase the resolution of the printed object. In may also be possible to create a resin exchange system to add additional materials to the vat after polymerization.

Put simply, keeping the resin material still should allow for higher quality 3D objects to be created. It could make exchanging the material a possibility in the future.

The scope of my project within Duckworth Scholars Studio will be dedicated to constructing the rotational motion system, which allows for a DLP projector to rotate at a specified speed around the resin vat. During this time, I will use various computer-aided design software to integrate parts that are readily purchasable with components that are custom designed to build the motion system. After the system is designed, motion simulations will ensure that the design is valid. Simulating key parameters such as motion smoothness and rotating arm vibration will need to be measured and optimized. This will ensure that, when a projector is placed on the rotating arm, the light pattern projected onto the resin is free from optical aberrations (unfocused light patterns).

One challenging aspect of this project is limiting the overall cost. The most expensive components consist of the DLP projector and the slew bearing, which provides the correct rotational motion. Unfortunately, we can’t 3D print a fully functioning electronic device like a DLP projector. Luckily, this isn’t the case for slew bearings. Thanks to Christoph Laimer2 and many others, it is possible to fabricate an entirely 3D printed slew bearing.

Future work will be dedicated to the optimization of the mechanical and software components of the project. It is still unknown whether a 3D printed bearing will provide the same longevity and smooth motion as an industrial-grade bearing could provide. An investigation into 3D printing filaments made explicitly for bearing applications (iglide filaments by Igus) may provide smoother motion mechanics and improve bearing lifespan.

The field of 3D printing is still within its infancy. To reach the next plateau, methods and techniques that reduce barriers must be explored. Obstacles such as fabrication time is a universal limitation that is present in all forms in 3D printing. Therefore, developing alternative mechanical and projection methods that reduce printing duration is of great importance.