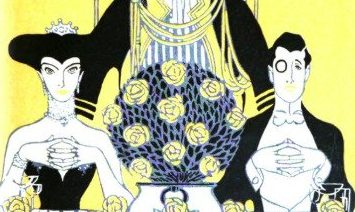 During the 2019-2020 academic year, I’ll be working as a Graduate Fellow in the Scholars Studio, exploring etiquette books in the interest of identifying the changes in standards of socially acceptable behavior. I want to know how American women were “supposed” to behave between the landmark convention at Seneca Falls and the ratification of the 19th Amendment, so I can identify the women who misbehaved and eventually categorize (and bask in the glory of) their social deviances.

So, why go digital? Why not use a sample of ten or twenty books and move forward from there? Well, there are hundreds of these things, all of which are identified by authors and publishers in different ways. These texts present themselves as manuals for the modern man, practical guides for husband-seekers, remedies for failing marriages or mismanaged families or unproductive vegetable gardens, but all exist under the umbrella of the “Etiquette Book,” and all contain overlapping points of advice about topics like party-planning, engagement-ring-buying, and baby-naming.

Considering the lack of information on publishing and circulation, and considering the sheer number and variety of etiquette books in play, digital is the only way to go. Gathering a collection of digital texts will allow me to work with a comprehensive and inclusive list of titles, and will ensure that the findings are truly representative of social expectations through the decades.

Where did I get these etiquette books? If you’re working on a digital project, where should you start? One of the best resources available for book-based work is HathiTrust, “a partnership of academic & research institutions, offering a collection of millions of titles digitized from libraries around the world” (their words, not mine). I found out this past May that I’d be working on the project, and wanted to spend the summer conducting as much research as possible. A quick search for “etiquette book” on Hathi brought me to my first ten texts, and restricting the search by decade of publication helped to further expand the list. By the end of last semester, I had a modest but respectable spreadsheet that included the title, author, and publishing information for 32 titles.

But how could I confirm that the titles in my search were representative of social expectation and regulation? And how could I find more? At this point, I turned to the library.

Two physical collections, Arthur M. Schlesinger’s Learning to Behave, a Historical Study of American Etiquette Books (1946) and Sarah E. Newton’s Learning to Behave: A Guide to American Conduct Books before 1900 (1994), included perspectives on the practice and importance of etiquette during the 19th and 20th centuries, and the bibliography from an online database, Twentieth Century Advice Literature, included dozens of titles, all presented in a spreadsheet that made it easy to categorize entries by year and city of publication. These resources were invaluable in turning my etiquette starter pack into a comprehensive corpus.

After a summer of research and corpus curation, I started the Fall semester with a list of 208 etiquette books, conduct guides, and educational pamphlets for men, women, and children, all published in America between 1848 and 1920.

Complications, Considerations, and Next Steps

So what’s next? As excited as I am to have a collection of 208 texts, I know that my corpus is still under construction, and that a few questions need to be answered before moving forward.

Originally, the plan was to only include texts written to/for women, but many guides about marriage were written for couples, and there are quite a lot of books dedicated to helping bachelors separate the respectable wheat from the gold-digging chaff. I decided they should be on the list, but once I allowed for books written to/for men, it was difficult to draw a hard line between which titles would and wouldn’t be included — what do I do if a book written contained two chapters on being a husband and father, but nine chapters on hunting and choosing liquor for your home bar? Included selected chapters? Or the full text?

Several authors on my list, like “Dame Curtsey,” made a career of telling people what to do, saving their readers from potential social peril with guides on “Party Pastimes,” “Candy Making,” and “Guessing Contests.” But should each of these guides be included in my corpus? Her Book of Etiquette will certainly be listed, but could the Dame’s Book of Games for Children for Indoors and Outdoors and All Occasions possibly be relevant to this project? How much “Dame Curtsey” is too much?

These questions, and more like them, will continue to come up throughout the project, but trying to answer them all would prevent any substantial exploration of etiquette. At some point, I’ll have to close the door on corpus construction. In the interest of staying on schedule, I’ve given myself a strict timeline — through the end of September I’ll continue looking for new guides, new pamphlets, and adjusting the framework of my list as needed. On October 1st, my list will be as finished as it’ll ever be, and I’ll be ready to dive into textual analysis.