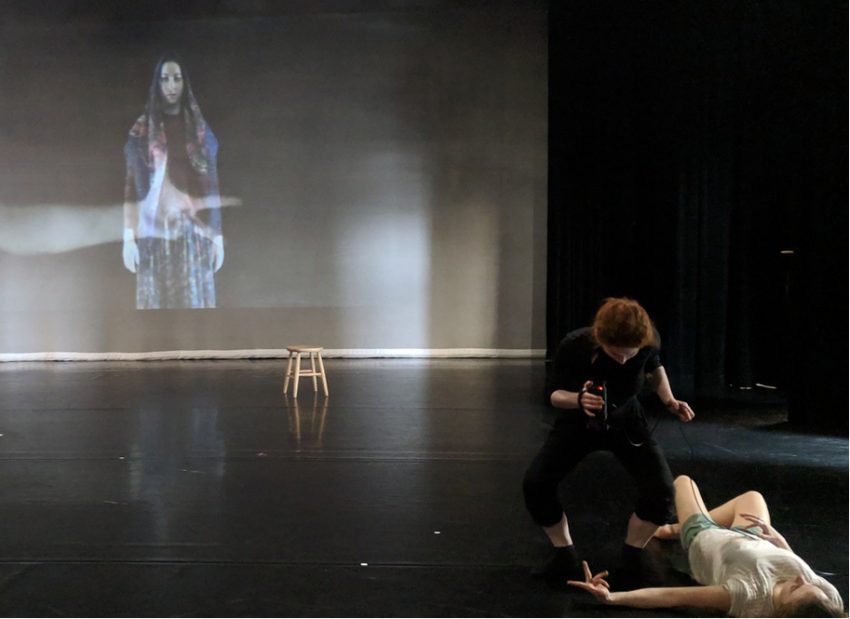 On the screen a hand grasps.  It is large (cinematic scale to be exact), stretching 5-10 ft in each direction.  It is faint without the saturated color we have come to associate with a Hollywood film.  It grasps at another faint image, that of a woman. In some ways this is not unique. 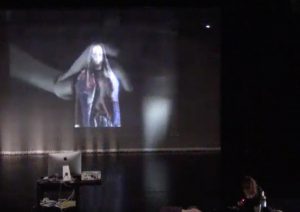 The layering of semi-translucent images on film is not necessarily new.  Yet there is greater tension than normal for the brain in interpreting this image as this is not a traditional movie screening.  This is a section of a rehearsal of my dance piece “Harbin, My Refuge”. It is being practiced in Conwell Dance Theater, a performing arts theater usually used for dance.

In front of the screen are two people, or in the language of dance studies, dancing bodies. In contrast to film these are breathing, messy, fully live, unmediated bodies. One is dancing in the traditional sense.  The other is circling her with a camera with a cord dragging behind. Through this unconventional improvisational duet we witness the filming, and the power relationships inherent in the roles of videographer and subject.

Often we only see the product of filming in the form of a film or Youtube video. We watch a product bounded by a frame.  We have no knowledge of what was beyond it. Here, we as the audience are watching the process. We are seeing both sides of the frame.  We see the faint hand on the screen at cinematic size separate from the body, juxtaposed against that same hand as part of a whole living and breathing body.  As consumers of media we have seen “close-up” film shots, which essentially are giant disembodied body-parts frequently enough for it to feel normal, but the presence of the live bodies destabilizes the normalized nature of these disembodied body-parts in cinema.

Power of a Videographer

The dancer is on the ground in a prone position. She is circled by a figure cloaked in black holding a camera.  It is clear that the dancer on the ground, the object of the camera’s live feed has no agency over the framing of the footage projected on the screen.  She turns away and the camera follows; she can not escape. The power of controlling the camera is on display. As viewers we are often ignorant of the power relations behind a film, which creates a vacuum that we as audience members can assume is tacit consent. Instead of this common ambiguity, the lack of agency and consent of the dancer is visible reminding us that cameras are often tools of surveillance.

Returning to the screen, it is displaying a live feed of the hand superimposed on the image of a woman. This screen work is part of a larger dance piece. The woman on screen, is a dancer who was live in the space earlier.  She now exists online the the two dimensional digital space of the screen. She walks towards us and stands in place staring forward. In this 2D world she is geographically anchored in contrast to the constantly changing focus of the the live-feed image of body parts that she shares this 2D world with. 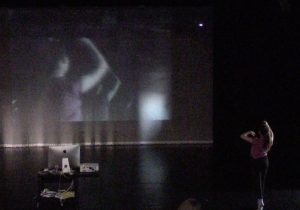 This digital body of the woman turns away from the audience and dissolves as she walks away from us leaving the projection of the live-feed to take up the entirety of the screen without interference from other digital objects.  The image on screen is clearer and simpler as we are only looking at one image and no longer forced to interpret overlaid imagery. The temporal continuity of the live feed makes it the normative default in this situation, yet it is a challenging video to anchor ourselves to as it is literally unstable as it is the product of a hand-held camera.

Bringing History into the Present

The live-feed projection is not alone on the screen for long as another image soon joins it.  The new image that has faded in, is that of Stalin, and invisible yet important force in the larger dance piece that this video work is a part of.  In history Stalin was a powerful figure controlling the fate of millions of people including the lives of those being explored in this dance piece.

Yet, on screen the digital depictions of past and present co-exist sharing the same pixels.  They are equal. Stalin also fades away, but the projection of the dancer in the live feed stays, she is constant. Her liveness in front of the screen makes her a stronger presence than Stalin, placing her at the center of the story and flipping the power relations of history.