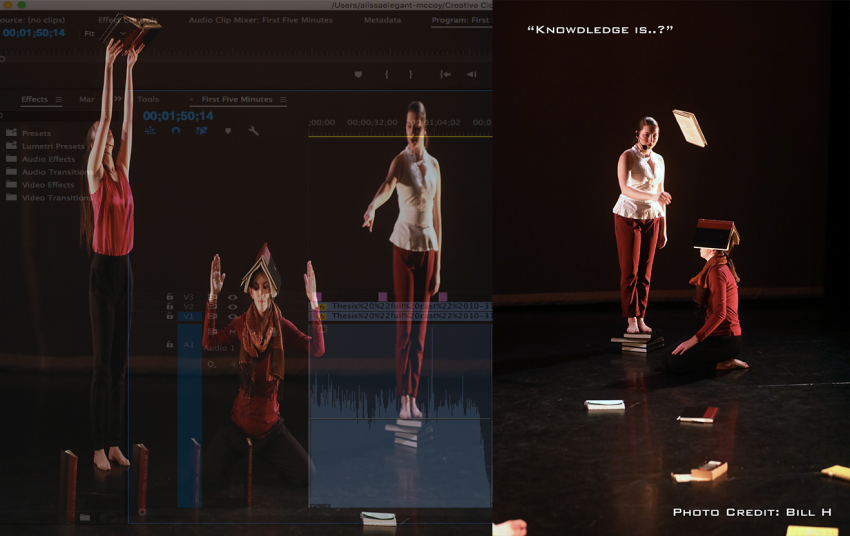 One of the delights of watching dance is the “live-ness” of the dancers in front of you.  They are living and breathing, even sweating. There is no digital screen mediating or editing what you see.  The human body is incredibly complex, making it challenging to replace by robots: The centrality of the human body, with all its messiness, means that the job of the choreographer make LinkedIn’s list of jobs least likely to be automated out of existence through technical advancement.

In addition to working at the DSC, I am a choreographer.  This semester, video, and in particular the editing of video, has influenced my choreographic process.  Choreography is labor intensive. While I can imagine what different dance moves or formations of dancers might look like, I can’t test my choreographic ideas until I am in the studio with dancers embodying it.  Time in the studio is a very valuable, but scarce resource. Dancers’ time is limited, so is the availability of dance studios. To make best use of my time in the space I try to prepare, but it can be challenging: choreography itself isn’t a material thing that can be taken home and worked on.  Unlike an essay, I can’t edit a draft on my own. This is where video comes in, because it is an approximation of choreography that can enable manipulation.

Video as a Tool of Reflection

I first started using video as a tool to allow for preparation and reflection, but it recently has become much more.  The video camera itself is nothing special; I usually use a cell phone. But editing programs like Adobe Premiere Pro enable me to combine footage from different rehearsals and even manipulate aspects such as speed.  I can work with two groups that have different but related choreography on different days of the week and use an editing program to see how they relate. I can get a very good estimate of whether the choreography is connecting in the way I imagined.  If I called all the dancers to one rehearsal there would be a lot of waiting around as I worked with one group and then the next. It also means that if I want to see how different sections of a dance work together I don’t need to necessarily run them all during one rehearsal but can combine footage from two different rehearsals.  Video is an incredible tool in helping with the challenge of bodies in the studio.

Video has an even more transformational potential in the choreographic process directly related to experimentation and problem solving.  There was a section of the piece I am currently choreographing that just didn’t feel right. Every time I watched it, it just felt “off.”  I couldn’t put my finger on the problem. I could rework it every time I entered the studio, but that has a high opportunity cost.  I can’t move forward if I am constantly tinkering with the same seemingly troubled choreography.  It is also demoralizing and unsatisfying for the dancers.  I wanted to gain a sense of what changes had real potential, so I imported the footage into Premiere Pro and started tinkering. In Premiere you can separate the audio from the visual footage, so I drastically slowed down of the video footage without altering the audio.  The unsettling feeling went away.

My newly edited video gives me a sense that this change has potential.  It doesn’t tell me if it is going to work.  The bodies in the video are 2D digital bodies that don’t have the same limitations of human bodies. Human bodies interact with physics and are each anatomically unique. They can only slow down in certain ways.  Human bodies will never be digital bodies, but they can interpret the digital bodies.  I will have to modify the choreography so that a human body can perform it at the speed I would like, but I have confidence that the tinkering and changes will bring me and my dancers closer to my choreographic vision.