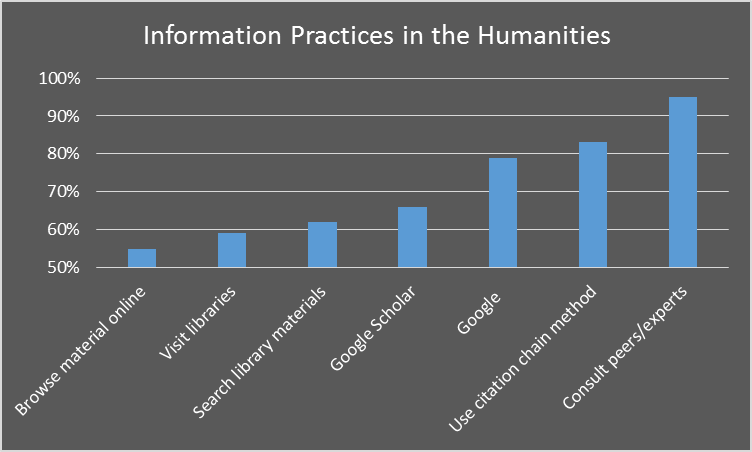 As I mentioned in Part One of this blog thread, I attended The Oxford Internet Institute’s Summer Doctoral Programme and had the opportunity to hear from research fellow and Digital Humanities (DH) specialist Dr. Kathryn Eccles.

The second part of Kathryn’s presentation was about a 2011 study that she and her team conducted: “Reinventing Research? Information Practices in the Humanities.” This study consisted of six case studies and attempted to understand how scholars’ methods have changed because of digital resources. In particular, they were attempting to discover if the fear of “Googleopoly” (or that research is just becoming Googling) was based in actual practices and if consequently people are becoming lazier due to digitization initiatives. Here are some of their general findings:

Their findings seem to ease some fears that digitized materials will lead to lazier and less social scholars (see unnecessarily apocalyptic pieces such as Marche’s “Literature is not data: Against Digital Humanities”). Almost all of their sample still speak with other researchers and over half still visit libraries.

Social interaction is also born out of crowdsourcing, and Kathryn cited crowdsourcing as an integral part of maintaining successful digital initiatives in many DH scenarios. Some key themes Kathryn highlighted:

For example, Kathryn and her team found that the taggers in crowdsourced, “museums without walls” projects:

In sum, Kathryn and her team argue that DH is an important academic addition for a plethora of reasons:

Kathryn also noted that as DH scholars we need to ensure that we remain conceptual, reflexive, and philosophical. We can’t just rely on libraries and IT. There are already journals and conferences dedicated to DH topics, and we need to continue to build scholarly networks.

Inevitably, some questions arose in our discussion including, “do you have to know how to use tools?” and “do you have to build things?” Researchers are especially concerned with areas such as access to software and additional time beyond their usual reading, writing, and so on. The argument made was that all DH scholars do not need to know how to code. “Think about all of the computer scientists who have never had liberal arts training!” many participants added.

I, on the other hand, have to disagree with these claims. I believe that all DH scholars should have at least introductory coding and building knowledge. I don’t mean to imply that scholars need to actually code or build huge projects themselves, but a working knowledge is necessary. If you are blind to how tools and coding structures work, you are at a serious disadvantage. Additionally, not everyone has the resources to hire computer scientists to aid them in their DH research.

Those who have to work on their own, or at least without programmers or computer scientists, will very quickly find that pre-made tools often can just not give them the data they desire. I have fallen into this problem  myself; I basically taught myself introductory Ruby so that I could scrape Twitter data that would actually give me telling findings. I plan on learning “R” in the near future.

I leave you with some great readings that Kathryn suggested:

Andrew Prescott, ‘Consumers, Creators or Commentators? Problems of Audience and Mission in the Digital Humanities’, in Arts and Humanities in Higher Education: An International Journal of Theory, Research and Practice (Sage, 2012).