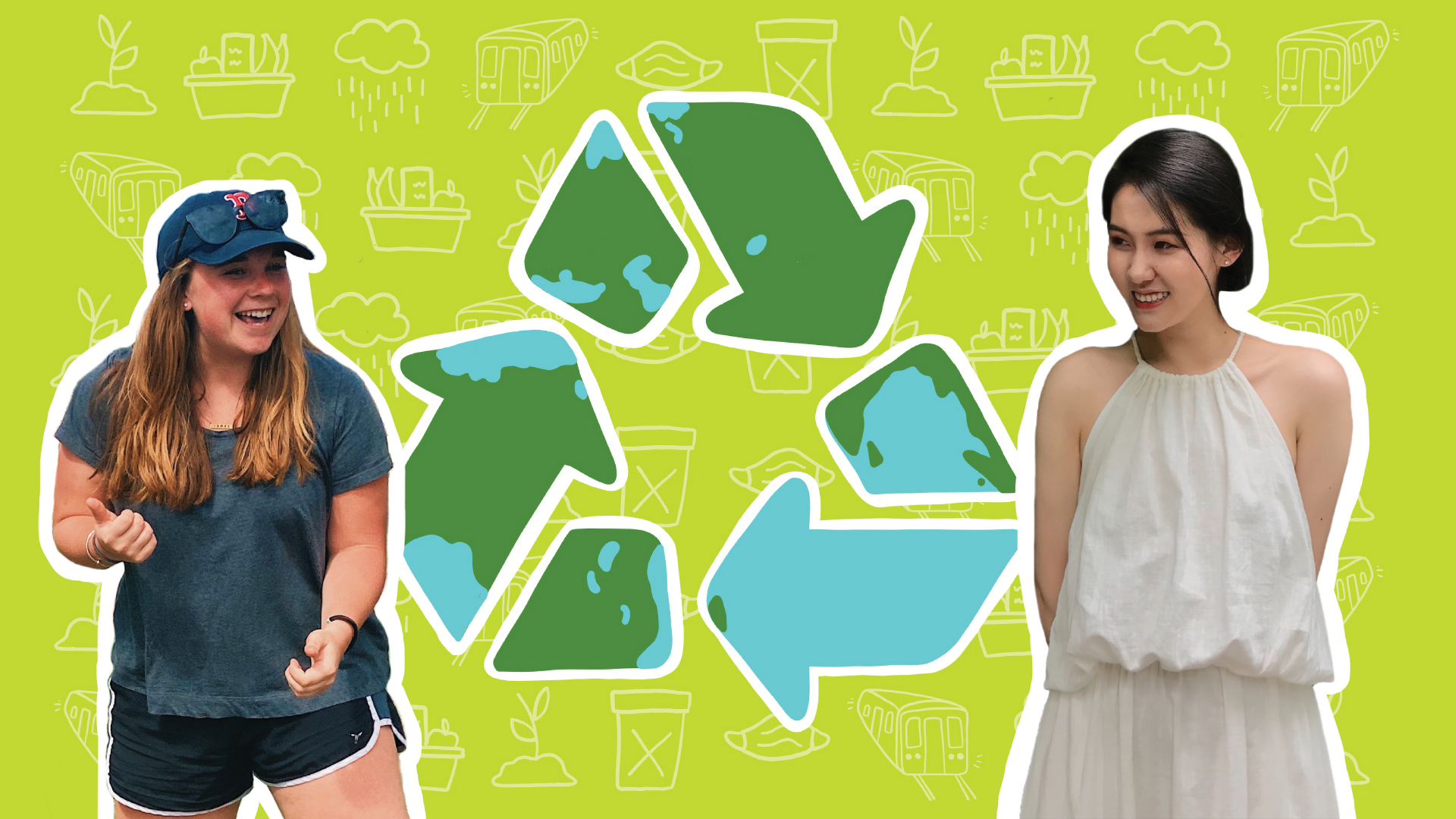 Studying abroad promotes global awareness and sometimes, by exposing students to new cultures and new ways of thinking, changes in habits. Among the many valuable lessons students experience living abroad is how climate change affects different cities and countries, and how local residents carry out sustainable practices.

Such knowledge can have a lasting effect, altering students’ perceptions and behaviors after they return home. Read below what Temple students learned about sustainability when studying abroad.

The planet continues to warm, a phenomenon that has been exacerbated as a by-product of industry. Ultimately, each country faces their own consequences from global warming. Living abroad gives students the opportunity to expand their knowledge and thinking about the problems confronting us in other places in the world while reflecting on the consequences of climate changes in their home countries.

Pangcheng Huang (FOX ‘21), an international student from China who studied on Main Campus in Philadelphia, highlighted how her studies in the U.S. have shown her the importance of media coverage on climate change as a way to promote changes needed for sustainability. She mentioned how 10 years ago it was common to see snow in China, but with global warming, it has become rare. Now, she enjoys seeing snow in Philadelphia.

Before Kerry Shanahan (KLN ‘21) left for her study abroad program in Australia, news of unprecedented bushfires that had been ravaging the country since summer 2019 consumed global media. The news coverage opened her eyes to the environmental and political consequences of the fires.

She learned how the fires destroyed homes and displaced many Australians, as well as caused the deaths of billions of animals. Despite the destruction, Australia’s Prime Minister, Scott Morrison, gained international notoriety for refusing to reduce fossil fuels and take action against climate change.

Hearing about the smoke in Sydney long before the pandemic made mask-wearing commonplace, Kerry had to pack a mask for her study abroad program.

Once she was in Australia, Kerry said, “I found it very interesting to be surrounded by politics that weren’t American. When you’re here [in the U.S.], it’s hard to see anything else, but Australians are also experiencing a huge struggle politically with climate change action.”

Through class discussions, she learned how Australia’s indigenous communities are the most affected by the destruction from the fires, and also how to include the voices of native people on the topic of climate change.

“They need to be at the forefront of this movement,” she said. “It was really interesting to see their [Australians] different perspectives on how to address this issue.”

Study abroad students often noted how transportation systems in their host countries were or were not reducing carbon emissions, an action critical to mitigating climate change. The systems in each host country varied greatly according to the culture and infrastructure of the host city and country.

Miquela Berge (CLA ‘24), who did a Temple Exchange Program to Germany, was impressed with the great job the country has done with their public transportation. With subways working almost 24 hours a day in most of the big cities, and a reliable and extensive bus and train system all over the country, cars aren’t needed as much. Also, due to extensive and organized traffic lanes, bikes and scooters are quite popular.

She highlighted how different this experience was compared to her past experience. “I come from the suburbs [in the U.S.], [where] there’s no public transportation,” she said. “You need a car to get around.”

While Kerry fell in love with Sydney’s well-organized public transportation system, Emma Grant (CLA ’22), who studied at the Temple University Rome Campus, noticed how Rome and Italy were built for pedestrians instead of big cars.

“I mostly relied on walking to get from place to place within the city,” Emma said.

With the continuously increasing amount of trash produced worldwide, finding solutions to trash, recycling management, and waste reduction has become critical to discussions around sustainability.

Emma was impressed by the trash system in the Eternal City, where the sanitation department not only separates cardboard and glass, but also places compost bins everywhere. She plans to incorporate new trash separation habits into her life back in Philadelphia.

“I am getting a compost bin in my college apartment,” she said. “It’s going to be great because I will feel much more conscious about food waste.”

In the past few years, discussions about sustainable food practices and consumption, including waste reduction, have increased within the sustainability movement. Because food is so closely connected to culture and identity, each student, depending on where they visited and where they came from, gained a different perspective on the sustainable food practices of their host country.

Since coming to the U.S., Pangcheng has begun to celebrate the wide variety of vegetarian and vegan options she notices here in comparison to her home in China.

“I think maybe in China we can also do that,” she said. “Not only for our health, but also because of the poor conditions animals face in this industry. Maybe in the future we can just try to eat less meat.”

For Miquela, who was studying in Germany, buying more accessible and less costly organic products became the best option. She began to understand how easy access to healthier food with more nutrients contributes to a more sustainable way of life. This emphasis on affordable organic farming enables farmers to treat the environment with the necessary respect.

“They have [in Germany] organic options everywhere, showing that you don’t have to have more money to be healthy,” she added.

Also having an European experience, Emma observed the different ideas Romans have about food and food waste, some of them being the purposeful lack of “to-go coffee” and taking home leftovers from restaurants.

“[In Rome,] people will go grocery shopping every day or multiple times throughout the week to ensure that they are not only minimizing food waste, but are also eating food as fresh as they possibly can,” Emma said. “I think this is a great concept, and I would like to apply that to my life back home, because it really does reduce food waste and cooking at home is a really great sustainability practice.”

To hear more about the lessons on sustainability our students gained around the globe, make sure to watch the recording of “Study Abroad and Sustainable Living,” a panel during International Education Week 2021, which was the source of this article.