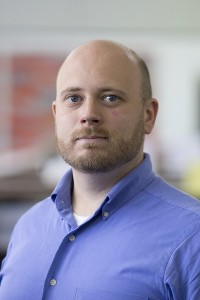 Matt Shoemaker is the Head of the Loretta C. Duckworth Scholars Studio and has worked to build the digital scholarship program on Temple’s campus since 2013.  He has created and given workshops in several areas of digital scholarship including making technologies (3D printing, 3D scanning, physical computing, photogrammetry), basics of GIS for digital scholarship, creating digital exhibitions, textual analysis, data cleanup, project design, games for education and as historical models and other DS areas.  Prior to coming to Temple University, Shoemaker worked for the Historical Society of Pennsylvania where he led the development of HSP’s digital library, digitization program, and co-authored several successful gran‌t proposals for digital projects.

Shoemaker holds an MA in history, focused on French empire in North Africa, and an MLIS with a concentration in archives; both received from the University of Wisconsin Milwaukee.  His  current interests focus on the use of digital scholarship in history and utilizing game design and play, particularly with tabletop board games, for pedagogy and research. He has collaborated with several institutions in the region, including the Philadelphia Museum of Art, and worked as an archival consultant and co-producer for a documentary on the history of Dungeons and Dragons.  Matt has also published a board game, Bee Lives: We Will Only Know Summer, which was designed to appeal to hobby gamers and serve educational uses in middle school through higher ed.  He also wrote the chapter “An Overview of the History and Design of Tabletop Wargames in Relation to Gender: From Tactics to Strategy” in the book Feminist War Games? Mechanisms of War, Feminist Values, and Interventional Games. Please come speak with Matt if you have any questions about digital scholarship at Temple, digital scholarship and history, project design or other above mentioned projects.