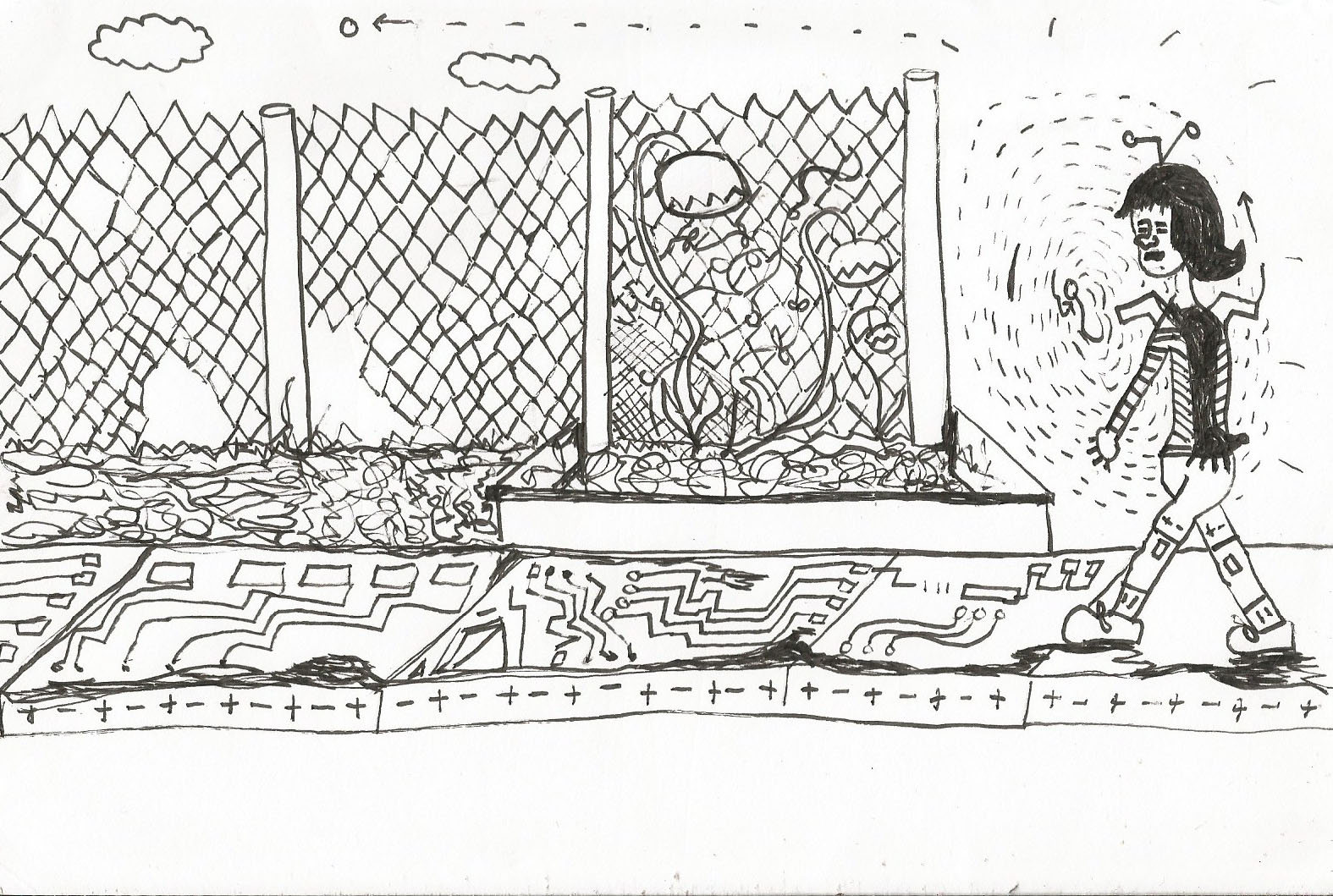 “If a garden could talk, what would it say?” thought the young cyborg as she walked passed a metallic fence that was climbing with tomatoes and sunflowers. The yellow blossoms hung their heads low, thirsty for a river among the city’s glowing grid. The world was now flowing on one international circuit. The fragrance always struck her; not like that putrid smell of the underground cyber-train, but the scent coming from this living space made her feel more human. As she clinked on passed the garden, she whispered directly to that somber sunflower, “my calculations report that the rain is coming.”

The quote above comes from a sci-fi zine I am working on called Quantum Alice. It is a narrative about the intersection of space, time, technology and nature. The question the cyborg asked is precisely what I am looking to answer during my research at the Digital Scholarship Center. Gardens can and do talk, and in order to understand them, one must become familiar with their ways. Unfortunately, in today’s technologically charged society, more and more people are becoming separated from the very nature that keeps them breathing. According to a New York Times Article by Tamar Lewin entitled “If Kids Are Awake, They’re Probably Online”, “The average young American now spends practically every waking minute — except for the time in school — using a smart phone, computer, television or other electronic device”. Lewin’s article later mentions that youth are spending an average of 7.5 hours per day with these devices in hand. These statistics are continuing to grow. Are we moving closer to becoming cyborgs? Will the coming generations be more robot than human?

I manage a community garden close to Temple University’s campus called the Defend The Future Garden. I have worked with several different groups of kids during my time there, and it is surprising the things children believe and say. Some children truly believe that carrots originated at the grocery store.  Over the course of this semester, my research will focus on developing a technological device that will be used to educate various publics about where food comes from and how it grows. By building a device that can translate the language of the garden, namely sunlight, water and soil, into data visualizations on a web platform, I am attempting to merge nature and technology to provide open source education on the basics of growing your own food.

This smart garden device will be powered by micro controllers (see arduinos and raspberry pi), and sensors that will read basic variables in the garden such as PH, moisture, temperature and sunlight. This device will be implanted in the Defend The Future Garden on 15th and Diamond Streets, and will also eventually be linked to Temple University’s Temple Contemporary Gallery in the Tyler School of Art. The garden is associated with a nonprofit social justice organization called Philadelphia Urban Creators that seeks to solve urban problems such as food scarcity in low income neighborhoods. The device will be used to engage both North Philadelphia’s youth, and the community of Temple University on the intersection of technological communication and the benefits of organic, locally grown produce.

1 thought on “If Gardens Could Talk part 1”