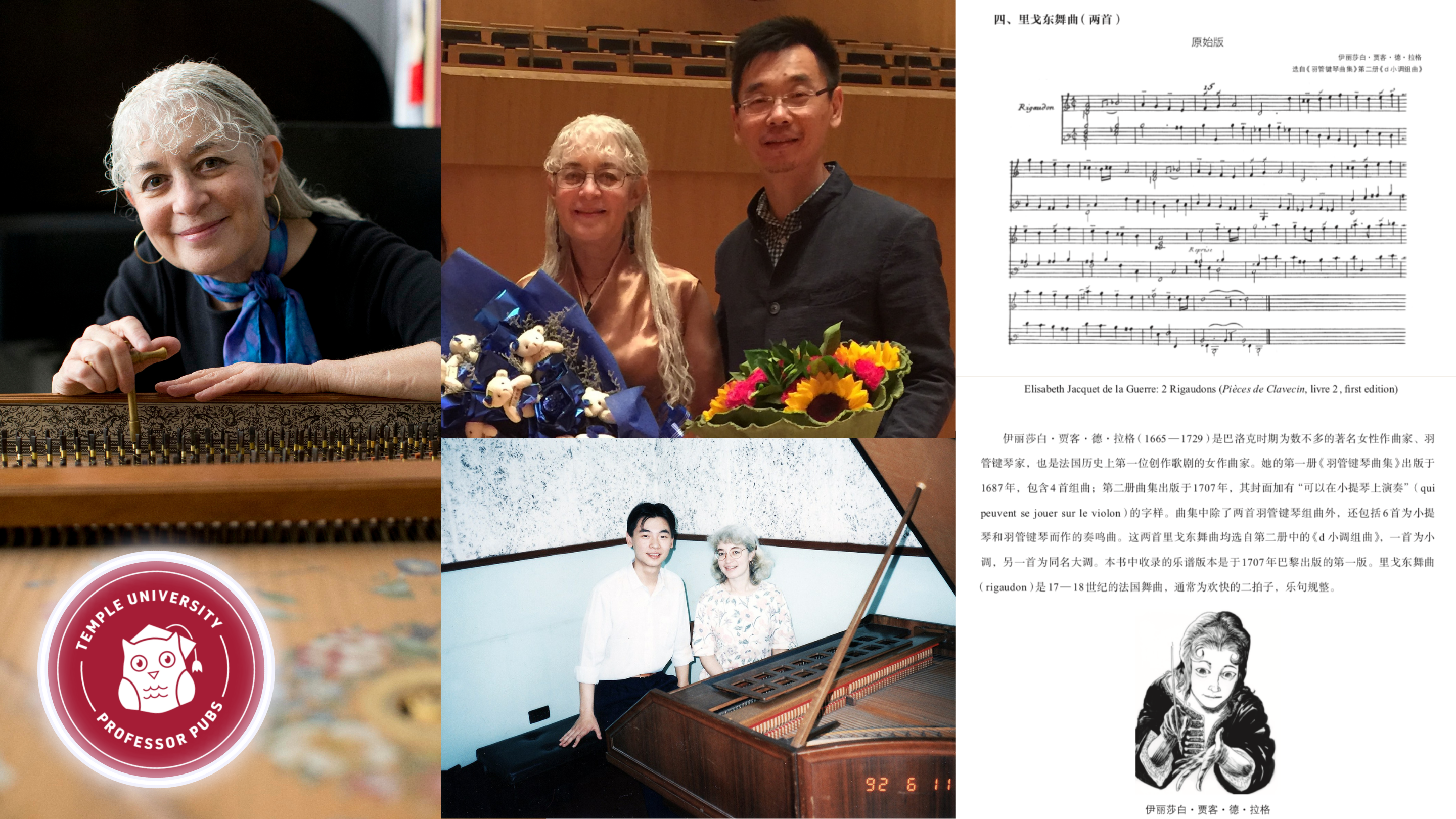 In 1991, Professor of Keyboard Studies at Boyer College of Music and Dance, Joyce Lindorff, moved to China to accompany her husband who received a Fulbright to teach journalism. Little did she know that her temporary move would lead her to publishing a book about Baroque music 30 years later.

When she began her journey she had no knowledge of the Chinese language, yet she landed a job at Shanghai Conservatory of Music teaching harpsichord, a subject that had not previously been taught in China. Her students quickly became her professors; while she taught them about historical keyboard practices, they taught her Chinese.

Though Lindorff learned her new language by ear at the Shanghai Conservatory, to learn how to write Chinese characters, she accompanied her seven-year-old daughter to school.

In addition to her Chinese lessons, Lindorff, who later went on to fulfill two Fulbrights of her own in China and Taiwan, performed harpsichord concerts on Chinese television with the Shanghai Symphony Orchestra. Soon, teaching at the university made her realize the need for materials in Chinese to facilitate learning in her specialty—Baroque music, a Western music style that developed between the 16th and 18th centuries.

Lindorff’s experience living abroad and learning a new language opened her mind and piqued her curiosity about global cultures and perspectives. She continued to travel frequently to China to perform and teach, and is now an honorary professor at both the Shanghai and China conservatories.

Adding to her tale of immersion in two cultures, in 2021, Professor Lindorff published her book, Baroque Keyboard Performance Practice which is currently selling out in China. Drawing from a connection she made during her early time in China, Lindorff’s collaborator on the book is from her first group of students in Shanghai—Zhu Di, now a professor at the China Conservatory in Beijing.

Zhu, a Temple University alumnus, earned both his master’s (2000) and a professional studies certificate (2001) at Temple’s Boyer College of Music and Dance prior to completing his doctorate at the Cincinnati College-Conservatory of Music (2006).

Launching the Zhu and Lindorff collaboration, in January 2019 the China Conservatory awarded them a grant to write a book about Baroque music, with the stipulation that the book be used for classes. Extending beyond the classroom, shortly after their book was published, it began attracting wide general interest among musicians.

“The most important thing was to be able to convey information that musicians found meaningful, and help them make music,” Lindorff said.

Though Lindorff and Zhu were writing about a type of music that existed long before the Internet, it was modern technology that helped them collaborate from their respective locations in the U.S. and China. Only during Lindorff’s occasional trips to Beijing to teach and play were these two partners able to work in person. But throughout the process they collaborated equally and continuously on both music and text. The publication was finalized remotely last year, thanks to numerous emails.

To enhance the experience for their readers, Lindorff and Zhu are now working on recording all the music that appears in the book, providing both historical and modern scores. Soon, readers will be able to listen, both in China and the United States.

“Music is an oral art,” she said. “To convey sound ideas onto the printed page is always a challenge—it is better to be in person and share the sound.”

Photo 1: Professor Joyce Lindorff, one of the authors of the publication Baroque Keyboard Performance Practice.

Photos 3 and 4: Pages from the book, illustrations done by Nathaniel Thompson, New York hip-hop artist and graduate of the Savannah College of Art and Design.

Photo 5: Professors Lindorff and Di in 1992, at the time she was his teacher at the Shanghai Conservatory.