Youth Responses to the COVID-19 pandemic 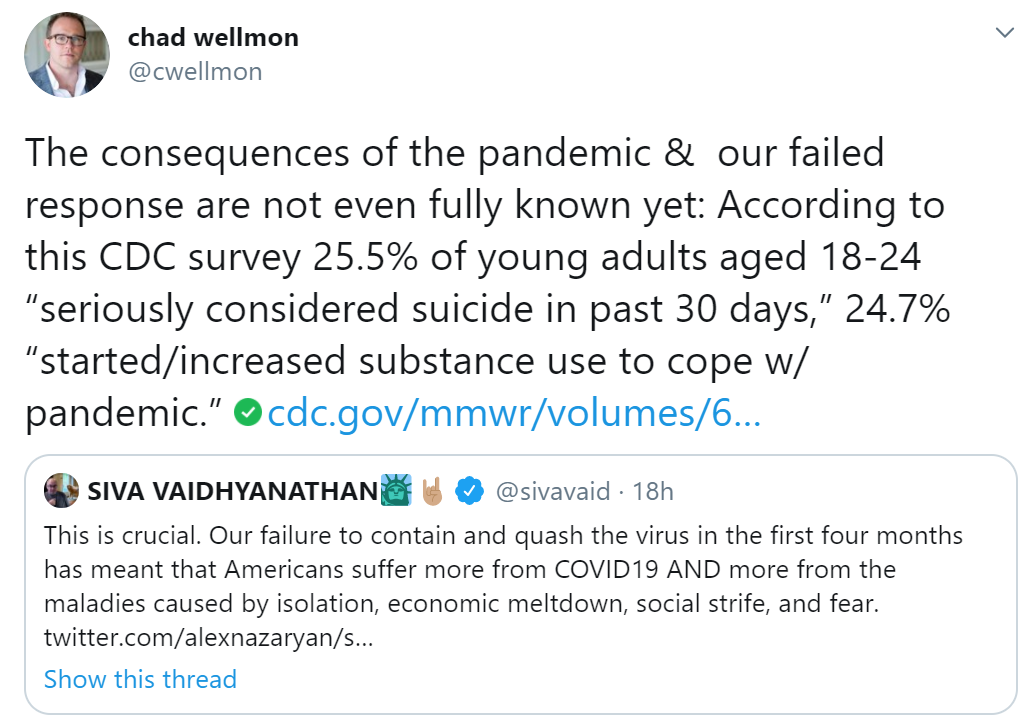 I was a bit skeptical of this statistic when I saw it; a quarter of young people having such strong, adverse reactions to the pandemic seemed a bit incredible to me.  I looked up the study and sure enough Wellmon is accurately portraying the findings, although I am still a bit skeptical. 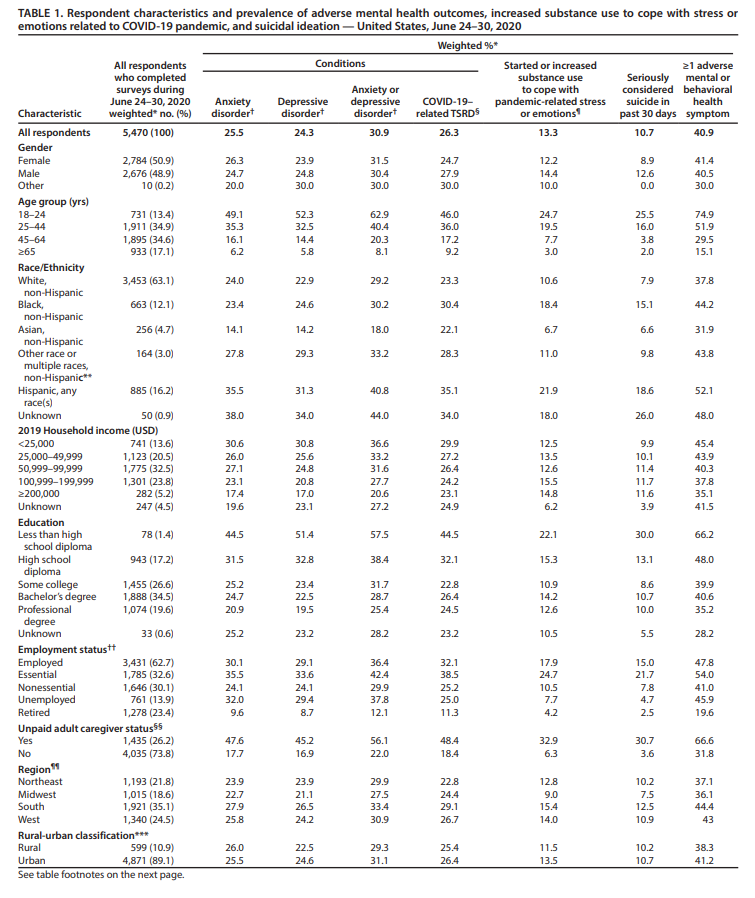 First, this was a Qualtrics survey, so recruitment was presumably done among Qualtrics panelists.  My suspicion is that online panelists are a bit unrepresentative of the general population, but one way to counteract this is to use weights which this study did (although it appears the weights were based on only a few core demographic variables–gender, age, and race).  The write-up in MMWR says that respondents were informed of the study purposes beforehand, and so one wonders if that drew on people who were more likely to see themselves as victimized by the pandemic.

Second this appears to be a relatively lengthy survey with 86 questions gauging people’s adverse emotional reactions to the pandemic.  Doing a survey online with so many questions tapping into relatively similar things can be pretty mind-numbing, and lends itself to careless responses.  This does not automatically translate into upwardly-biased estimates, but is just a reservation I have.

Third, the question on substance abuse explicitly asks people to attribute their behaviors to the pandemic, and I am not a fan of asking people for their conscious motivations for their behavior.  The question on suicide does not do this, but still it is being fielded in a survey that informed its participants upfront that it was looking at the effects of the pandemic on people’s lives.  Again, this does not mean the percentage is biased upward but is another reservation I have.  If it was me doing the study, I would have minimized mention of COVID-19 and tried to mimic questions about substance abuse and suicidal ideation that are fielded in other recent surveys (pre-pandemic) and just do a pre/post comparison.

And of course, starting or increasing substance use is pretty vague and one can imagine a lot of situations where someone would say yes but still not suffering from substance misuse disorder.  This does not just include people becoming alcholics or misusing opioids.  For the record, the study says that substance use was defined as use of “alcohol, legal or illegal drugs, or prescription drugs that are taken in a way not recommended by your doctor.”  (p. 1051).

I note that the percentage of young people also are also classified as suffering from anxiety disorder, depressive disorder, or trauma or stressor-related disorder (TSRD) also are quite high and I would guess we have a similar problem of quite broad conceptual definitions