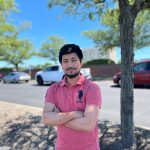 Sharan Dhar grew up in the harbor city of Chittagong, Bangladesh. After finishing high school, he got accepted into the University of Dhaka, Bangladesh, and relocated to the capital city of Dhaka. In 2017, he received his five-year bachelor’s degree (B.Pharm.) from the Department of Pharmacy at the University of Dhaka. Here, under the guidance of Dr. Firoz, he worked on a Phytochemical investigation of Cretaeval nurvala plant extract during his undergraduate studies. He attempted to correlate certain putative in-vitro actions of this plant, such as anti-inflammatory, antioxidant, total phenolic content, analgesic activity, and so on, with the documented chemical constituents of this plant. This work inspired him to explore the chemical and biological aspects of pharmaceutical science. As a result, he earned his Master’s degree (M.Pharm.) in 2018 from the Department of Clinical Pharmacy and Pharmacology at the University of Dhaka. Under the joint supervision of Dr Abdur Rahman and Dr. A.K. Azad Chowdhury, he worked on synthesizing benzimidazole derivatives and studying their in-vitro pharmacological effects in animal models. Benzimidazole has been already recognized as a potential pharmacophore in various therapeutic compounds, which motivated him to build further derivatives utilizing new synthetic processes and investigate their potential impacts in biological systems. Simultaneously, he was actively involved in other research initiatives such as drug-metal complex synthesis and biological evaluation, phytochemical research in the phytochemistry lab, and department of pharmaceutical chemistry.

Sharan began his PhD studies in analytical chemistry at Temple University in the fall of 2021. He started his research career as a PhD student at Dr. Borguet’s lab, where his primary research focus is on 3-D porous materials-metal organic frameworks (MOFs) and covalent organic frameworks (COFs). He is particularly interested in their adsorption behavior and catalytic properties.