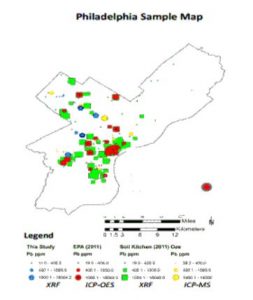 Urban renewal including resurgent construction and promotion of healthy living that integrates urban gardens is exposing populations in cities to soils through the liberation of dust and consumption of homegrown vegetables. In Philadelphia, despite a rich industrial history reaching back hundreds of years before the Clean Water or Clean Air acts (similar to many cities), no systematic study has been conducted to assess the safety of Urban Soils in Philadelphia and the physical processes that control the distribution of contaminants such as lead and other heavy metals. Analysis of data gathered in April 2011 by the Soils Kitchen, a grass-root community effort to promote safe urban gardening, revealed that ~35% of 362 sampled soils are dangerously contaminated with lead.