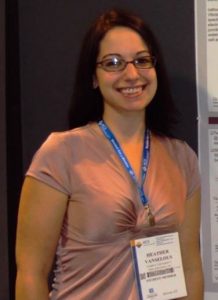 Heather was born and raised outside of Philadelphia and began attending Temple University in the spring of 2008, where she majored in Chemistry. Heather’s academic interests are in chemistry and physics, which was why she joined the Borguet group in the fall of 2010 as part of the Undergraduate Research Program. Heather worked in the nonlinear optics lab, where she researched the interactions at solid-aqueous interfaces using laser spectroscopy.

In February 2011, Heather Vanselous was awarded the Creative Arts, Research And Scholarship (CARAS) Program Grant from the Office of the Senior Vice Provost for Undergraduate Studies, as well as, the Beau and Shirley Brown Scholarship in Chemistry.

Heather was selected to participate in the Physical Chemistry Symposium Workshop for Undergraduate Chemistry Majors at the Fall 2011 ACS National Meeting in Denver, CO. She received a travel grant through VPUS (Vice Provost of Undergraduate Studies).

After working at the US Department of Agriculture on catalysts for biodiesel production and oil modification processes, Heather completed at Ph.D. at Cornell University in the Petersen group where she focused on physical and materials chemistry of interfaces. In May 2017 she joined Corning Inc. (an hour west of Ithaca, still in the Finger Lakes) as a Laser Processing Scientist.