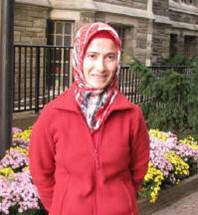 My name is Habibe Durmaz and I was an international master student from Konya, Turkey. I was born and raised in Konya and received my Bachelor’s degree in Physics from Selcuk University in 2006. During undergraduate study, I became interested in nanotechnology and thus decided to come to the United States to further my knowledge in the field. I joined the Borguet Group in October 2008. I was studying nanoimaging at Temple University.

Habibe is currently working on her Ph.D. in electrical engineering at Boston University.