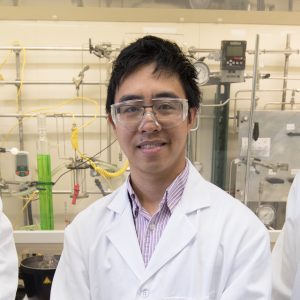 Gordon joined the Borguet group in May 2008.  His projects focused on the tunable visible luminescence of carbon nanodots and the fluorescence of organic fluorophores covalently attached to carbon nanotubes. The latter project, “Carbon nanotube-based solar cell,” was selected for funding by the Creative Arts, Research and Scholarship (CARAS) Program at Temple University.

During his time at Temple University, Gordon received awards from The 73rd Intercollegiate Student Chemist Convention, The Eastern Analytical Symposium (EAS) Student Award, and The Richard Asher Paclin Memorial Prize.  He also participated in the NSF Research Experiences for Undergraduates (REU) program at Rice University, as well as the Diamond Peer Teacher Program at Temple University under the guidance of Dr. Andrew Price.

Gordon left the Borguet Group as he completed his Bachelor of Science in the Class of 2010. He moved on to complete his Ph.D. in Chemistry from the University of Pittsburgh under the supervision of Dr. Alexander Star. Since then, he is a researcher at the National Energy Technology Laboratory.